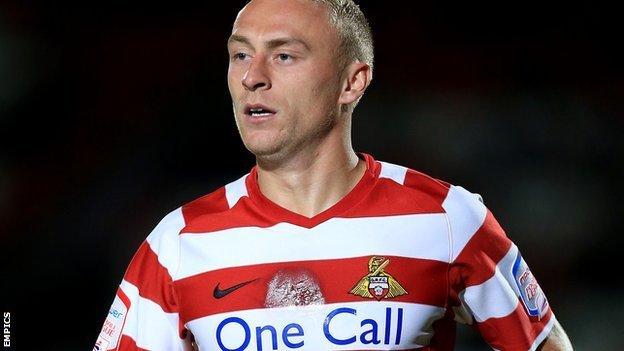 Doncaster Rovers claimed their fourth successive victory as they beat Oldham Athletic to move level on points with League One leaders Tranmere Rovers.

Both sides ended with 10 men as Iain Hume was shown a second yellow after a foul on Connor Brown but Bouzanis then shoved Hume and was also dismissed.

Doncaster's winning goal came during a spell where they were on top as Hume had an effort headed off the line by Cliff Byrne before Bouzanis saved a David Syers shot.

Oldham get a quick opportunity to gain some revenge as the two teams meet at Boundary Park on Saturday in the second round of the FA Cup.

"I'm pleased for all the supporters - we're on top of the league on points [second on goal difference]. We dug a result out.

"I've got to say all credit to the players. We're playing Saturday, Tuesday and that's four wins on the trot.

"I thought in the second half we played miles better."