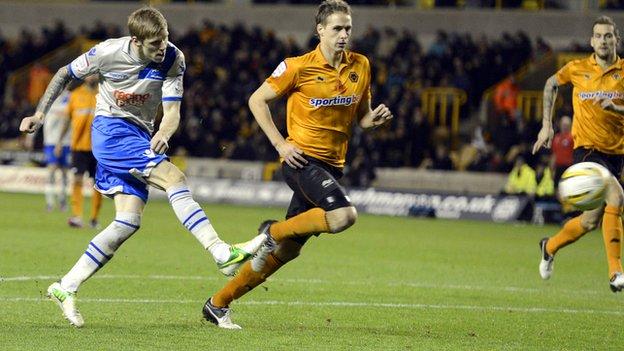 Millwall striker Andy Keogh returned to Molineux to haunt his old club as faltering Wolves failed to win at home for the sixth game running.

But it did little to ease the pressure on Wolves boss Stale Solbakken.

His side have now gone nine matches without a win to slip to 18th, drawing chants of 'What a load of rubbish'.

In front of their worst home crowd in almost six years, Wolves' misery was compounded by a hand injury to keeper Carl Ikeme.

Wolves looked anything but the most out-of-form side in the division early on as they ripped into Millwall.

With Bjorn Sigurdarson the chief threat, they created a string of early chances, the closest of which saw Bakary Sako's shot deflected over for a corner.

But Millwall looked menacing on the break, Keogh going down the inside-left channel to set up a great chance for on-loan West Bromwich Albion striker Chris Wood, who was slow to react.

And full-back Adam Smith was only just off target, powering a right-foot shot into the side netting.

The second-half was a different story as Millwall pressed strongly, Wolves taking until the 75th minute to have another shot at goal when Dave Edwards' fierce right-foot shot flew just over

Millwall have now won on their last three league visits to Molineux, but their most recent trip ended in a 5-0 League Cup defeat 15 months ago.

"For the first 25 minutes, we were easily the best team. We went at them and created big chances.

"But the second half was probably the worst we have played. We looked nervous and a lot of it was very untidy.

"There's only one man to blame and that is me and I have to sort this quickly. It's not normal that players of this ability should make so many tactical and technical mistakes.

"But I still feel that I am the right man for this job and am full of confidence that I can turn it around. And I am sure that the players are right behind me."

"It's certainly a better feeling than the last time I was here.

"In the first half we looked flat and lacked energy. And, for 20 minutes, Wolves looked very strong.

"But, in the second half, we looked in control and you could see the goal coming

"I'm really pleased for Andy Keogh. He had two goals disallowed on Saturday, neither of which I thought was offside, so he was owed one tonight."