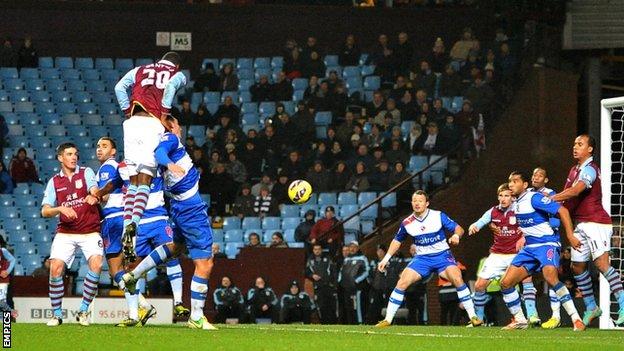 Aston Villa moved out of the Premier League bottom three thanks to Christian Benteke's late goal against Reading.

The Belgian striker headed in the winner from a corner late on to leave the Royals one place off the bottom.

Villa, who left striker Darren Bent out of the team for the second match in succession, also went close through Andreas Weimann and Ciaran Clark.

Reading's best chance fell to Hal Robson-Kanu, who had his goalbound shot blocked by Brad Guzan.

Brian McDermott's promoted side are now four points adrift of safety and with Manchester United, Southampton and Sunderland coming up they face a tricky few weeks.

The Royals were expected to find the going tough this season, but not as many people thought Villa would struggle under the stewardship of Paul Lambert, who performed wonders at Norwich.

Villa came into the match having only managed one win in nine, but on the back of a good performance against Arsenal.

Lambert's side had only scored 10 goals in 13 league games this season and only three at home - fewer than any other side.

Key striker Bent, who signed for the club in a £24m deal in 2011, was left out of the team to face the Gunners despite having recovered from an ankle injury and the England man was once again omitted.

The Villa manager might have been left rueing the decision with two of his three attackers - Weimann and Benteke - missing great opportunities during the match.

The first fell to 21-year-old Belgian Benteke, who tamely struck a low shot into the arms of Adam Federici from 15 yards after finding himself clear.

The second - arguably the easier - was wasted by Austrian Weimann, who smashed Benteke's square ball high over the bar from eight yards.

Defender Nathan Baker was also left cursing his misfortune when his header from a corner bounced into the ground and over the bar.

Reading, a point and a place below Villa going into the game, also created chances to open the scoring in the first half, with United States keeper Guzan brilliantly blocking Robson-Kanu's shot and Morrison sending his header foot wide.

Lax defending was a major theme of the match, as was profligacy in front of goal.

Further opportunities followed after the break, with Guzan using his feet to stop Jason Roberts's effort, while Le Fondre inexplicably nodded over from six yards.

Villa kept the pressure on the Royals with Clark flicking his header wide when clear and Brett Holman shooting into the side-netting.

It seemed the breakthrough would never come, but with 10 minutes to go summer signing Benteke used his physical prowess to climb above Morrison and head in.