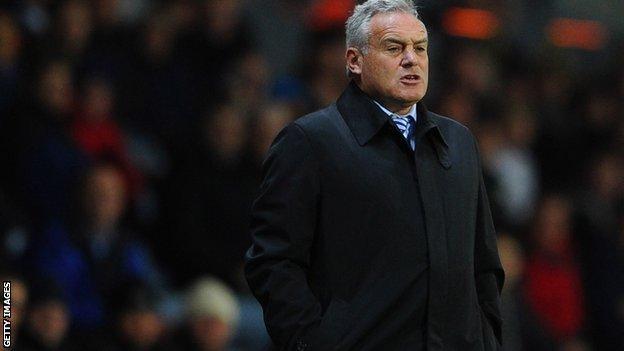 Michail Antonio put Wednesday ahead, but Fernando Forestieri equalised with a low shot from just inside the area.

The game turned when Manuel Almunia saved a Chris Lines penalty after half an hour following Daniel Pudil's reckless challenge on Jay Bothroyd.

Goals in the second half from from Alexandre Geijo, Troy Deeney and Mark Yeates sealed the win for Watford.

The victory for the Hornets moves them to within two points of the play-offs.

Watford have scored 14 goals in their last three away games.

Owls manager Dave Jones and the home fans did not have long to wait to see their side give them early hope of a much-needed win, Antonio taking advantage of a Watford defensive error after three minutes to score his fifth goal of the season.

But the visiting side were level 15 minutes later, when Pudil found Forestieri, who in turn found the bottom corner.

The turning point came after half an hour following Pudil's foul on Bothroyd. While the QPR striker, on loan to Wednesday, was receiving treatment Lines saw his penalty saved with some ease by Almunia down to his right.

Referee Tony Bates withdrew with an injury on the hour mark, replacement Tony Harrington taking charge for the closing stages where Watford moved to a comfortable win.

Geijo headed his first goal for Watford after 67 minutes, and Deeney pounced on a loose ball to eight minutes later with his first touch after coming on as a substitute.

Yeates sealed the win for the away side with a superb long-range strike with seven minutes remaining.

Sheffield Wednesday manager Dave Jones: "We're going through a very rough time. We've got to come out fighting and be strong and be brave.

"If people think somebody else will do a better job, go get him. And if he doesn't do it, then what? Go and get someone else?

"How many managers has this club had in the last 10-15 years? Ten or more? Chopping and changing isn't the right answer."

Watford manager Gianfranco Zola: "I am very happy, especially with the second half, it was a very good performance from us.

"I'm delighted with the result. First half we faced a team that played in some spells some very good football.

"They created some problems for us. To come up with a result like that the performance has to be good."