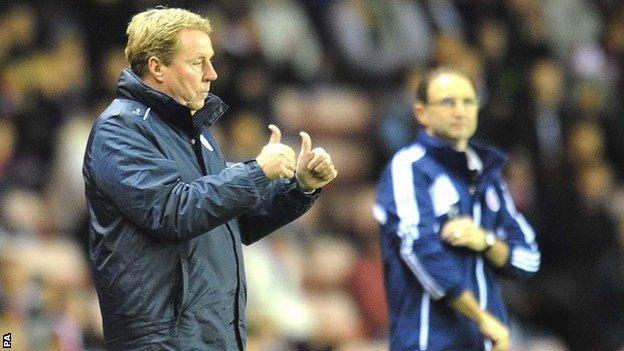 Harry Redknapp inspired an improved display from Queens Park Rangers in his first game in charge as the Londoners secured a goalless draw at Sunderland.

As Redknapp had demanded before kick-off, Rangers put in a committed display and created more goalscoring chances.

But Djibril Cisse failed to convert a trio of efforts while Jamie Mackie and Adel Taarabt both saw shots blocked.

Sunderland also put in plenty of effort but Steven Fletcher's saved shot was the closest they came to a goal.

The result does little to drastically improve either side's position at the bottom end of the Premier League table, with QPR still rock-bottom having claimed a joint record worst haul of five points from 14 games, while Sunderland are still only two points above the relegation zone.

Redknapp had an immediate rejuvenating effect when he took over at Portsmouth in December 2005 and then Tottenham three years later (the less said about his spell at Southampton the better) but he himself has admitted the size of the task at QPR eclipses his earlier jobs.

The reasons for this are clear, namely a pitiful points haul after 14 games and a side that is woefully lacking in cohesion and confidence, but there was enough on display in the north east of England to give the 65-year-old belief that another feat of Premier League escapology is a possibility.

However, while Redknapp has brought an injection of hope to QPR, Sunderland boss Martin O'Neill remains in search of a solution to the stagnation that has set in at the Stadium of Light as he approaches the first anniversary of his appointment.

The Black Cats had fight but little inspiration and while rumours of O'Neill's demise at the weekend were wide of the mark, a continued failure to accrue significant points will add further fuel to the fire.

Unsurprisingly in the circumstances the game was played at frantic pace with little precision or fluency, especially in intermittent torrential rain, but it was an entertaining affair during which both sides had their chances.

QPR striker Cisse - producing one of his engaged performances that have been scarce this season - could have opened the scoring on three occasions in the first half but his unmarked back-post header and curling shot from the edge of the box were both saved by home keeper Simon Mignolet and his 25-yard pile-driver flew a yard past the top corner.

The visiting side's best two chances both came in the same move as Mackie ran clear into the box before his shot was well saved by Mignolet, with Phil Bardsley flinging himself in front of Taarabt's follow-up.

Sunderland striker Fletcher was too often an isolated figure in attack but nevertheless could have swung the game in his side's favour.

In the first half, Adam Johnson put him through in the box with a neat flick but Julio Cesar got down to save, while in the second he was denied by the Brazilian's half-time replacement Robert Green from a header.

Had Stephane Mbia's 25-yard drive been a yard or two to the right it could have given Redknapp the perfect start to his Rangers reign but he will take solace from a first point in five games and a performance with promise.