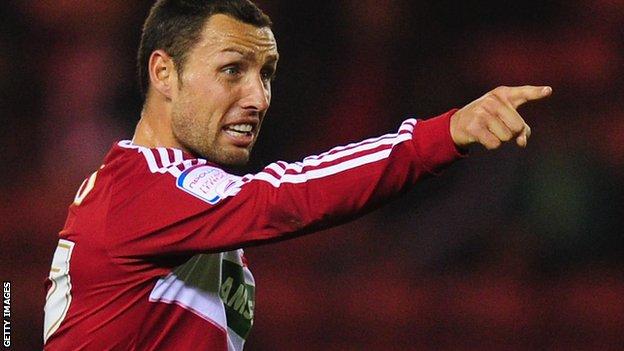 A double from Scott McDonald helped put Middlesbrough's promotion challenge back on track as they secured a convincing victory at the Riverside.

After-back-to back defeats, Tony Mowbray's side returned to their best and went ahead in the 29th minute when McDonald prodded home from close range.

McDonald fired in his second five minutes from time to wrap up the win.

The Terriers had almost taken a first-half lead when Jack Hunt hit a fierce drive just over the bar after a mazy run.

Middlesbrough have won their last six games against Huddersfield and have not conceded in the last four.

But the home side grabbed the opener when Lukas Jutkiewicz's drilled cross was turned in by McDonald.

Huddersfield keeper Alex Smithies did well to palm Clarke's horrible sliced clearance onto his own bar.

His opposite number Jason Steele was alert to keep out Scott Arfield's dipping effort from under his crossbar.

Middlesbrough finally added a second when Ledesma struck with a stunning 25-yard free-kick.

And McDonald scored a controversial third in the 86th minute when he fired in after good work from Jutkiewicz with Hunt lying in the box injured.

Middlesbrough boss Tony Mowbray: "Any win's a good win in this league - it's a very hard league.

"It was important to get back to winning ways and I think they showed tonight that confidence hasn't been dented.

"I think with the weekend [defeat to Bristol City], the potential was there to knock the confidence and the belief and yet the team showed a real resilience tonight to match a very hard-working team. We managed to get the points and we'll put them in the bag and move on to the next game."

"When you come up to Middlesbrough, the Riverside, you know you're up against a good team who were looking to bounce back from the weekend's result.

"They are a good, fluent football team who can create chances and we had too many players who were off it and allowed them to do what they're good at doing.

"It was a poor performance from us tonight and we got what we deserved basically."