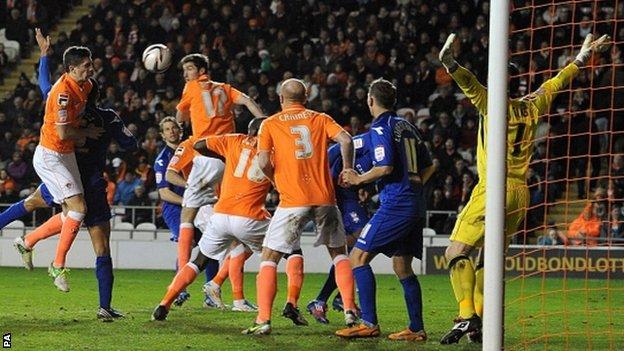 Blackpool midfielder Thomas Ince put Appleton's side ahead with his fifth goal in six appearances.

The home side then saw a Kevin Phillips strike ruled out for offside against his former club.

Davies then headed in for Birmingham before Peter Lovenkrands hit the bar.

Blackpool made the brighter start and were rewarded when in-form Ince put them ahead.

Phillips collected a cross-field pass from Kirk Broadfoot, and when his shot was blocked by Pablo Ibanez, Ince picked it up to slot home from the edge of the box.

Nathan Delfouneso then had Jack Butland at full stretch in the Birmingham goal to tip over a dipping effort and Phillips converted from an offside position after Ince had hit the bar.

Birmingham had been on the back foot but found a leveller after the break when Davies climbed highest to convert Wade Elliott's inswinging corner.

An even contest had developed, and as the hour approached, Lovenkrands slipped the attentions of the Seasiders backline to rattle the bar with Matt Gilks beaten.

"We were the team, in terms of the impetus, in the second half as well but a lack of quality in the final third probably let us down a little bit.

"I do think, without making too many excuses, the pitch had a massive part to play in the game.

"A lot of the players couldn't really trust the bounce of the ball and there were a lot of passes going astray on both sides."

"We didn't manage the pitch because the pitch was difficult for both teams.

"Overall the attitude and application and defensive side of the game for the full game I was happy with.

"The state of the pitch is unfortunate for both teams because I think there's lots of good footballers on both teams."