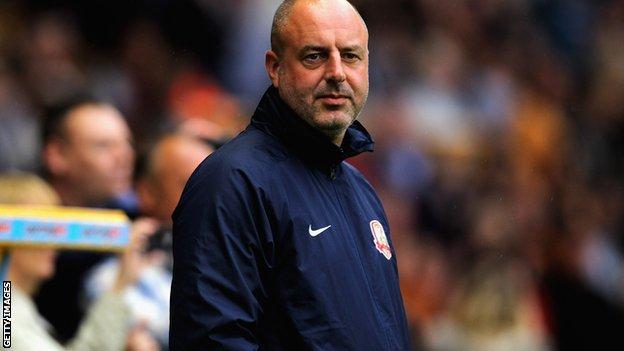 Barnsley's run without a win extended to eight games as they were held to a draw at home to Burnley.

Another goal for the prolific Charlie Austin gave Burnley a fifth-minute lead.

Marcus Tudgay equalised in the 37th minute with his first goal since his loan move from Nottingham Forest.

Danny Ings struck the woodwork for Burnley in the second half but despite an improved display the home side could not carve out a much-needed win.

Marvyn Bartley had already gone close when Austin headed home from a corner for his 21st goal of the season.

Barnsley's draw was their first point at home in four attempts.

Burnley dominated the early stages after the goal, but against the run of play the home side equalised through a headed goal of their own.

Tudgay connected with Scott Golbourne's cross to give the Oakwell fans something to cheer eight minutes before half-time.

However Burnley looked the better side after the re-start, with a free-kick from Ross Wallace forcing Barnsley goalkeeper Luke Steele into a fine save.

Steele could do nothing about Ings' shot shortly afterwards but was grateful to see the ball rebound off the right-hand post.

That roused the home side into action, with Craig Davies shooting wide and Akos Buzsaky drawing a save out of Lee Grant.

But the game petered out, leaving Keith Hill's side two points above the relegation zone and Burnley anchored firmly in the middle of the table.

Barnsley manager Keith Hill: "It was an uphill challenge after their goal, but the way the lads responded was absolutely superb.

"They showed a lot of bravery and I am pleased with the way we played.

"Performance-wise I am very happy and it is progress, definitely. I will wake up and look at the stats and if I can take away the scoreline, it will reflect very similar to the top teams in the league.

"The only thing is missing is the scoreline, we are that close, but are a million miles away."

"But we demand a lot from the players and we have to be realistic and know we might have a soft performance every now and then.

"So within that, the major positive was that we came out of it with a point. But the performance, especially in the first half, was not something that I was enjoying."