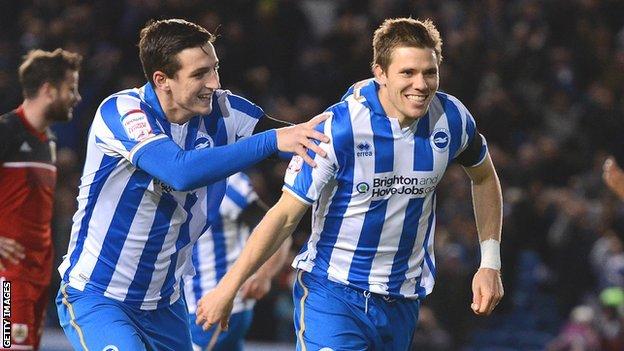 Goals from Dean Hammond and Andrea Orlandi gave Brighton victory over Bristol City and moved the Seagulls to within a point of the play-off places.

Both goals came in the first half with Hammond nodding home a cross early on from close range early on.

Orlandi swung in a free-kick which found the net through a crowded area and City were unable to respond.

Poyet shuffled his strikers after Saturday's 1-1 draw with Bolton with Will Hoskins and Stephen Dobbie coming in to the starting XI and Ashley Barnes and Craig Mackail-Smith dropping to the bench.

It made little difference to their potency in attack as Hammond stole in to head home Liam Bridcutt's free-kick.

The home side's advantage was doubled 20 minutes later from another set-piece as Orlandi's inswinging free-kick caught out Tom Heaton and the ball went through the keeper's legs and into the net.

City had to wait until the 36th minute for their first real chance, which Stephen Pearson crashed against the crossbar from 20 yards.

Four minutes later Derek McInnes' men had another big chance to get back into the match but Neil Danns' effort was cleared off the line by Gordon Greer and when the ball fell back to Danns again he was denied by keeper Tomasz Kuszczak.

City continued to plug away in the second half but Albert Adomah and Neil Kilkenny both failed with efforts from range and when substitute Ryan Taylor headed Kilkenny's cross wide late on their fate was sealed.

Brighton boss Gus Poyet: "We got a clean sheet, scored a couple of goals so I've no complaints.

"It was a good, professional display. We needed to keep patient and make it difficult for the opposition.

"Dobbie and Hoskins were desperate to play and this was an opportunity for them to come into the side and impress. I think they both had good games without being spectacular."

Bristol City boss Derek McInnes: "The Championship is an unforgiving league and if you don't defend set-plays you're in trouble.

"The first goal came from a free header and the second was a breakdown in communication between Matthew Bates and the keeper.

"We kept going but for all our good play in possession we couldn't get anything from it.

"We've played Blackpool, Middlesbrough and Brighton in our last three games and they have been tough ones. Our league position is of concern, but I firmly believe we will be all right."