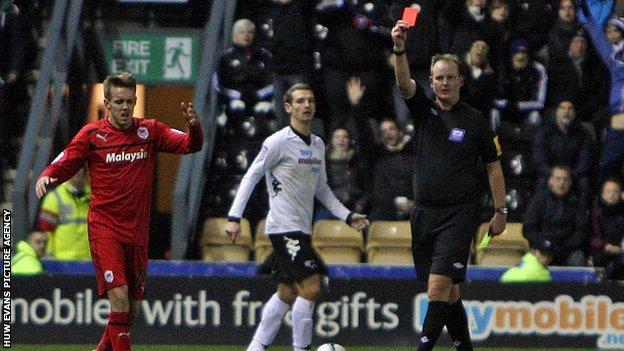 Theo Robinson's second-half equaliser secured a point for Derby to deny 10-man Cardiff a fourth successive victory in the Championship.

Cardiff's Craig Noone was sent off for two yellow cards before Robinson levelled from close range.

Derby piled on the pressure but Cardiff held on for a point to stay top.

The Rams were unchanged following the 3-2 win over Birmingham City but Cardiff's side showed two changes.

Cardiff did not have a player sent off in their first 17 games but have now suffered two red cards in successive games following Simon Lappin's dismissal against Barnsley at the weekend.

Youngster Joe Ralls came in at left-back for the suspended Simon Lappin while Joe Mason made way for Craig Bellamy, who was making his first start since 23 October.

Bellamy shot high over the crossbar from the edge of the area within the opening 90 seconds before Derby skipper Richard Keogh's header was cleared off the line.

Although the home side had started brightly it was Cardiff who took the lead against the run of play on 11 minutes.

Captain Mark Hudson's header was tipped onto the crossbar by Adam Legzdins only for Helguson to follow up and nod home his seventh league goal of the season.

The home side, who had only lost once at home previously this season, finished the first half strongly with Paul Coutts forcing David Marshall into making a fine save.

Bellamy, as he had done in the first half, blazed over the bar early in the second half after being played in by Matthew Connolly.

But two yellow cards in the space of three minutes, the second for a late challenge on Will Hughes, led to Noone's dismissal with less than half an hour remaining.

Derby took full advantage and Craig Bryson surged into the area before squaring to leave Robinson with the simplest of tap-ins.

Helguson almost restored Cardiff's lead but the striker failed to direct his header goalbound as Derby piled on the pressure.

John Brayford twice went close and Cardiff were fortunate Derby's appeals for handball against Peter Whittingham were waved away by referee Mark Brown.

The visitors survived six minutes of stoppage time during which Nathan Tyson's header was cleared off the line by Connolly.

Cardiff's defence worked hard to hold on for the draw which keeps them a point ahead of Crystal Palace at the top of the Championship.

Derby County manager Nigel Clough said: "Overall I'm very pleased with the performance. We've generally played very well at home this season. This performance was a continuation of that really.

"We huffed and puffed (in the) second half. I thought we had a lot of the ball, even with 11 against 11, but they are extremely difficult to break down, with 10 or 11 men."

"It's good when Cardiff come here and pay us a little bit of respect in the way that they play. I think sides are worrying a bit more about us than they used to."

Cardiff City manager Malky Mackay said: "After the sending off, to dog it out and to play like that against a team who have won the last three, scored nine goals and have only been beaten once at home this season was very pleasing.

"Up to that point I was very, very happy with my team. I thought first half we were very comfortable and just before the sending off I thought we were actually just starting to link up well.

"I suppose both could be seen as yellows so I don't have any complaints over them."