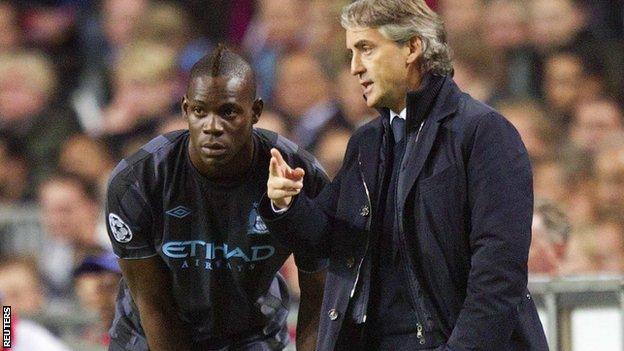 Manchester City manager Roberto Mancini believes striker Mario Balotelli could become one of the best players in the world if he worked harder in training.

"He has everything to be one of the best players in the world," Mancini said of his 22-year-old fellow Italian.

"He could be like Cristiano Ronaldo and Lionel Messi if he understands that to be like this you should work hard."

In March of this year, Mancini admitted that he did not trust his unpredictable striker, saying "he can score two goals next week but he can also take a red card".

And eight months on, Mancini revealed that it is still tough to coach the man he signed in August 2010 on a five-year contract from Inter Milan for a fee thought to be around £24m.

"It is not easy to work with him every day because if you are a manager, you should manage 22 players," continued Mancini.

"Mario outside the pitch is a fantastic guy. Sometimes he doesn't understand how his job is important for his life but I hope he can understand this quickly.

"He is 22 but life can go quickly. [He needs to] understand that to be like [Ronaldo and Messi] he should work hard, his mind should be always on your job, not on the other things that are not important. I am very sorry for him."

Balotelli has score 29 goals in 66 appearances for City - 17 of them in last season's Premier League title-winning campaign, although he was disimissed twice.

The second sending off came in a 1-0 defeat at Arsenal that almost derailed City's title challenge and had Mancini gesturing furiously at the ill-disciplined Italian as he appeared in no hurry to leave the action.

City's hopes of progressing to the knockout stages of this season's Champions League are slim.

They need to beat Real Madrid and Borussia Dortmund in their final two Group H games and hope other results go their way.