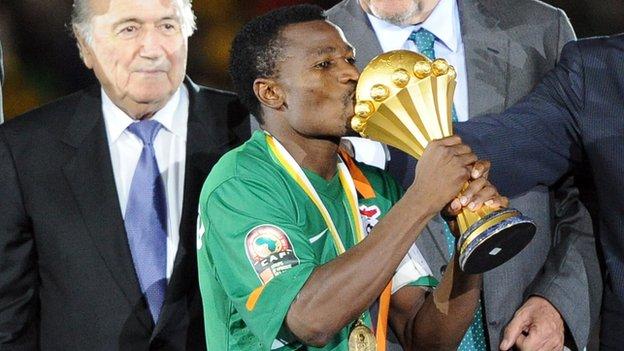 The last 10 years have been a rollercoaster ride for Zambia's 2012 Africa Cup of Nations-winning captain Christopher Katongo.

Katongo initially made his name at Zambian club Green Buffaloes between 2003 and 2004.

One of his lesser known feats at Buffaloes saw him score four goals in one game at the 2003 and 2004 editions of the Confederation Cup in 5-0 and 6-1 wins over Saint Michel of the Seychelles and DR Congo side DC Motema Pembe respectively.

However, unlike most of his Zambia team-mates who rose from Under-17 and 20 level, Katongo was a late bloomer and his path to Chipolopolo stardom began at Under-23 level.

Katongo was part of the 2003 All-Africa Games team that finished fourth in Abuja, scoring just one goal at the tournament and another in the qualifiers.

He made his Africa Cup debut in Egypt in 2006 where Zambia exited at the group stage but not before scoring the lone goal in Chipolopolo's 1-0 win over South Africa.

A year later, he famously scored a hat-trick against South Africa in a 3-1 away win in Cape Town to help Zambia secure qualification to the 2008 Nations Cup.

Meanwhile, his club career has taken him from Jomo Cosmos in South Africa where he played from 2004 to 2007.

His first stop in Europe was at Brondby in Denmark in 2007 and later transferred to German side Arminia Bielefeld in 2008.

In 2010, left Germany for Greece where he spent one year at Skoda Xanthi and later moved to China in 2011 to sign with his current club Henan Construction.