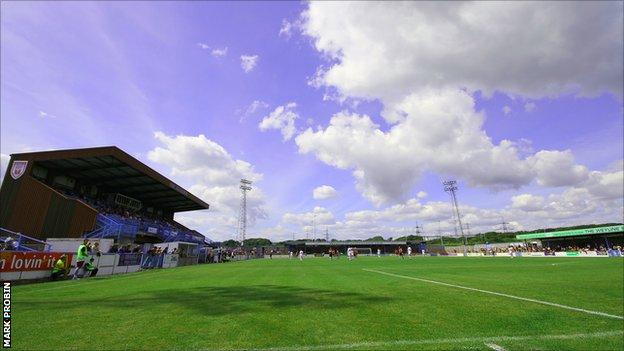 Weymouth have re-opened talks about the possibility of moving to a new stadium in the town.

Land surrounding their existing Bob Lucas Stadium is owned by a company called Wessex Delivery LLP, who want to build 200 houses on the entire site.

Their plans would see the club relocate to land near Lodmoor tip, an idea that was first mooted in 2008.

Talks are ongoing but a club statement said there was "a considerable way to go" before agreement could be reached.

The club feels under no compulsion to move from the Bob Lucas Stadium, but must clearly look at any proposals received if they might offer an improvement on the current stadium

Wessex Delivery hold a 15-year option from 2008 to acquire the site in exchange for funding a new community stadium within five miles of the existing ground for the Southern Premier Division club.

However, West Dorset Council and Weymouth & Portland Borough Council have yet to approve the plans and members of the public are now being invited to attend two consultations before the formal planning process begins to learn more about the benefits of the project.

"Weymouth FC confirms that it has recently held discussions with Wessex Delivery LLP on the subject of moving from the Bob Lucas Stadium to a potential new stadium within the Borough of Weymouth," the club said in a statement.

"The club feels under no compulsion to move from the Bob Lucas Stadium, but must clearly look at any proposals received if they might offer an improvement on the current stadium in terms of community facilities, income producing potential, running costs, and spectator accommodation.

"Any proposals made, to meet with the approval of the board, must also provide adequate safeguards on land ownership of the replacement stadium, as the current stadium is unencumbered freehold."

The statement added: "The club has been shown preliminary plans of a stadium that has some attractive features, in a location that appears adequate subject to investigation.

"But there is a considerable way to go before it can be said that it is a design that the board could recommend; and the club will also need to be satisfied as to the viability of the proposal.

"The club will not be party to any transaction that does not provide adequate safeguards, but would like to acknowledge that WDLLP are being constructive and proactive in meeting our concerns."