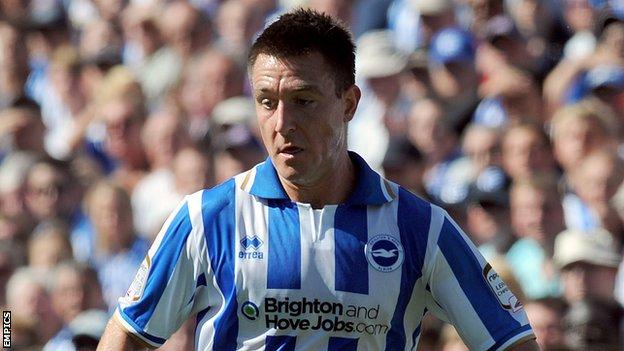 Brighton defender Marcos Painter says his first start this season felt like a second debut for the club.

The 26-year-old left-back played his first game of the campaign and made just his fourth appearance of 2012 in Saturday's 2-1 win over Huddersfield.

Around 75 minutes my calves had cramped up. I tried to carry on but I thought for the team's sake it was best to mention it to the manager and the physio to bring someone else on

He told BBC Sussex: "I've got to admit I was nervous because it has been a long time since I started a game.

"It was different emotions to what I'm used to. I loved it. It was weird because it was like my debut again."

The Irishman says he has had to accept being back-up after Bridge joined on a season-long loan from Manchester City in the summer.

"Maybe it's had a good effect on me, not being the number one and having to up my game," Painter added.

"The manager [Gus Poyet] said to me at the start of the season that Wayne would play but I had to be there to step in.

"He's been honest and said 'If you deserve to play, you'll play'.

"Wayne will play if he is fit and I accept that.

"It's still not a nice feeling but let's be realistic; he has Premier League and international quality.

"I was aware Wayne came off last Saturday. I thought he wouldn't come off for the sake of it so I thought my opportunity could come."

Painter was an ever-present in Albion's League One title-winning side in 2010-11 but was restricted to 22 appearances last season.

The former Swansea player missed almost three months of the season with a recurring hamstring problem.

After overcoming his injury problems Painter says that, on occasions, it has been difficult to come to terms with not playing regularly.

"It's horrible," he added. "That's one thing when your family play a big part and try and keep your head up.

"Last Saturday I was walking around [Brighton shopping centre] Churchill Square. You honestly don't feel like a footballer, although you are obviously part of the team.

"When you're not travelling [to away games] and training with the reserves it's difficult. You have to try and stay as professional as possible.

"You want to play football or be involved. No player likes to be sitting at home or just trying to keep fit.

"When Wayne came in I knew the situation and that a player of his quality will start. You have to keep your head.

"Hopefully it will bring my game on, make me more competitive and when I do get my chance I am on my toes and not complacent."