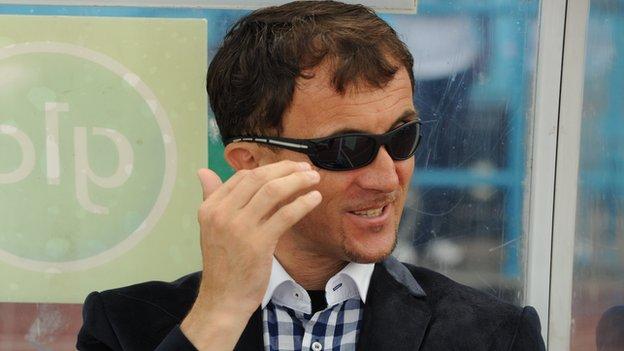 Rwanda coach Milutin Sredojovic is a worried man after four of his players suffered food poisoning, just days before they depart for the Cecafa Challenge Cup in Uganda.

All four were taken ill at the team's hotel in Kigali. The incident was reported to the Rwanda FA and the Sports Ministry who later moved the team to different accommodation.

The Serbian-born coach (pictured above), who has been in charge at numerous club sides across Africa, told BBC Sport that the next few days will be crucial to whether the players board the flight to Uganda.

He said: "I am just keeping my fingers crossed so that these players get better before we fly out to Kampala on Thursday."

The absence of these four players would severely disrupt Rwanda's plans, ahead of what Sredojovic accepts will be a competitive Cecafa Challenge Cup, especially from the likes of Uganda, Malawi and Sudan.

Rwanda, who finished runners-up last year, are grouped alongside Zanzibar, Eritrea and guest side Malawi.

"I am taking mainly young players because it is such tournaments which will always help us give them exposure and also build solid sides," added the coach.

Rwanda will open their campaign against Malawi on 26 November at Namboole Stadium before their second group game against Zanzibar three days later.

Meanwhile, referees for the tournament will undergo a mandatory medical and fitness test tomorrow. If any referee fails the tests, they will be removed from the list.