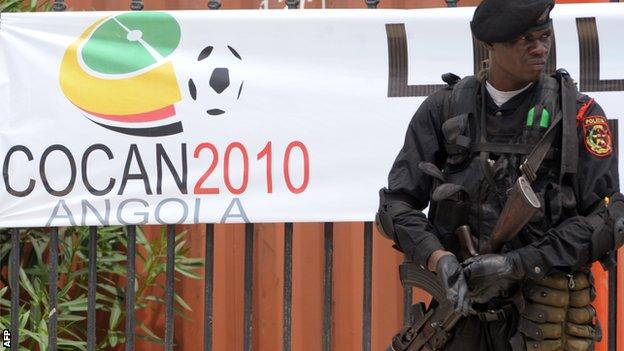 Togo winger Razak Boukari believes the deadly attack on the national team in Angola almost three years ago will motivate the players during the 2013 Africa Cup of Nations.

A bus carrying the squad - including Tottenham Hotspur star Emmanuel Adebayor - was attacked in the province of Cabinda as they arrived for the start of the tournament.

A faction of the Front for the Liberation of the State of Cabinda claimed responsibility for the attack.

Togo have qualified for the tournament in South Africa next year for the first time since the incident.

"Of course the attack will be on our minds," Boukari told BBC Sport.

"A lot of players who were caught up in the incident are still in the squad and for the people that died and their families we'll do our very best to have a successful tournament to go as far as we can.

"The main thing is that we know that the whole nation will be behind us and we'll do everything to make them happy. We can't wait for the tournament to get started."

Togo have been drawn in a group with favourites Ivory Coast, Algeria and Tunisia, and Boukari thinks the influence of Adebayor will be important against those sides.

The Tottenham striker came out of international retirement last year after receiving safety assurances from the nation's football federation.

"Adebayor is a huge player, who pushes us to greater heights," Boukari said.

"He's a leader and we need him. He took his time but came back at the right moment and has really helped us.

"I hope he's going to have a really big Cup of Nations."

Boukari joined Wolverhampton Wanderers in August in a £3 million move from the French club Rennes.