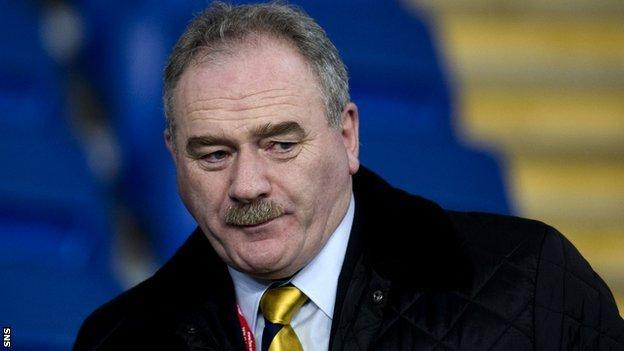 Hibernian have posted a trading loss for the second year running, with the Easter Road club's debt having increased to £6.4m.

The loss before tax of £900,000 - the same as last year's figure - is being put down to a reduction in player trading gains.

Chairman Rod Petrie said it was "disappointing" to report a loss.

"The financial results for the year reflect the poor performances on the pitch almost throughout the season," he added.

"The one sporting high of reaching the final of the Scottish Cup turned sour in the manner of the defeat [a 5-1 defeat to Edinburgh rivals Hearts].

"The club apologised to supporters for the lack of a performance on the day but now have the chance to atone for that defeat in this year's competition [in the fourth round]."

However, staff costs, wages to turnover and operating losses were also down on the 2011 figures.

Hibs have made a positive start to the season 2012-13 and are currently second in the SPL.

"The manager Pat Fenlon has rebuilt the team," added Petrie.

"Now the club is working closely with supporters to rebuild attendances at Easter Road Stadium and improve revenues for the current year despite the economic hardship that affects everyone."