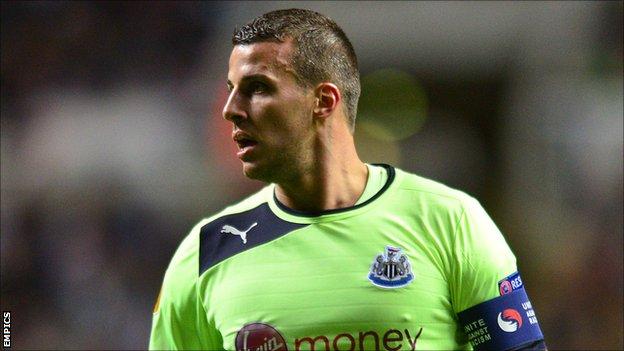 The Magpies lost only three home Premier League games throughout last season, but have already suffered as many defeats on Tyneside this term.

"We'll get that back don't worry about that," Taylor told BBC Newcastle.

Greenwich by birth, Magpie at heart

He joined the Newcastle Academy on a full-time basis in 2002 and two years later made his first-team debut in the Uefa Cup.

Since that time, Taylor has made 221 career appearances, all but six of which have been with Newcastle. His only spell away from St James' Park came during a loan spell with Wycombe.

"There's no point beating ourselves up. We'll get on with it and we'll try to put that right at home."

Saturday's 2-1 loss by Swansea was the latest of the setbacks on home turf, although a string of chances were passed up against the Welsh side.

France midfielder Hatem Ben Arfa was at the heart of most of the attacking play, and it was his late cross that was headed in by Demba Ba for a consolation.

"He was magnificent, you give him the ball and he turns up a great chance for the strikers or goes himself and goes past one, two or three players," Taylor said.

"He's got that ability, when you give him the ball we know something is going to happen and he's a special talent."

"Players have done well in the Europa League and they've been rewarded, with Shane and Sammy," Taylor added.

"The boys' played well, we just couldn't score the goals we wanted to, had some great chances, but it was one of those games where nothing went for us.

"Balls were going left, right and centre. On another day we'll probably have scored three or four.

"The excitement was there, fans can see that, but they've just got to stick with us."