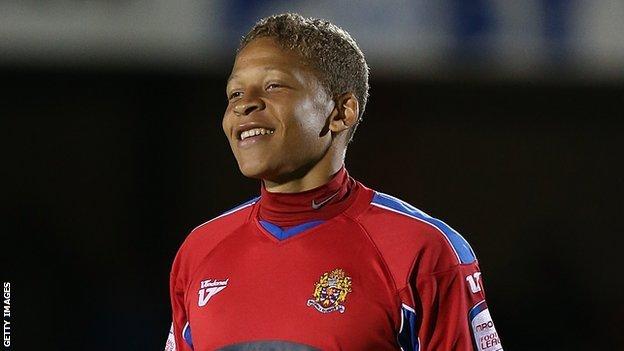 Peterborough United have boosted their strikeforce by signing Dwight Gayle on loan from Dagenham & Redbridge.

Gayle, 23, has scored seven in 20 games for League Two Daggers this term.

The move was revealed by Posh chairman Darragh MacAnthony on Twitter: "D Gayle has joined us until start of January. Energetic pacey strong striker."

And Gayle later tweeted: "Buzzing to be joining Posh on loan."

Peterborough have the option of making the move permanent in the January transfer window.

This is Gayle's first season in senior football, having signed a new contract with Dagenham & Redbridge in July, after making his name in non-league.

He scored 57 goals for Essex Senior League side Stansted in the 2010-11 campaign and, after joining Dagenham in the summer of 2011, found the net 42 times last term during a season-long loan spell at Blue Square Bet North club Bishop's Stortford.