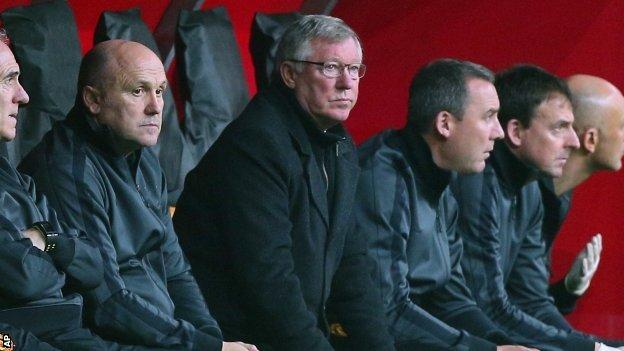 Sir Alex Ferguson praised his young Manchester United side, despite losing their 100% Champions League record with defeat against Galatasaray.

United went into the match having won their previous four games, but were beaten by a header from Burak Yilmaz.

"I think they handled the atmosphere and the temperament was good," Ferguson, whose starting XI had an average age of 24, said.

"Parts of the game were good, but we suffered at set pieces."

Yilmaz, who has scored all five of Galatasaray's goals in the group stage this season, punished United's defence a few minutes after the restart when he rose to nod in from a corner.

"We should have switched on and dealt with that ball," said 20-year-old central defender Phil Jones, who was making his first appearance this campaign having recovered from a back injury he suffered in pre-season.

At the other end, United's best chance fell to 18-year-old Nick Powell, whose header bounced off the crossbar.

"We had some good attacking play in the first half and, at that point, the only trouble they gave us was from outside the box," Ferguson said. "It was a very competitive, good game."

Scotland midfielder Darren Fletcher, who at 28 was the oldest player in United starting XI, also praised the youthful side for coping in testing conditions inside the Turk Telekom Arena.

"It was an intimidating atmosphere," he said. "It was difficult to hear, but you have to deal with that. The big problem was the pitch.

"I thought we did enough, especially in the first half. I thought the young players did fantastic and they will only get better playing in an atmosphere like that.

"As soon as they got the goal they slowed the game down. They started to foul and make tactical fouls."