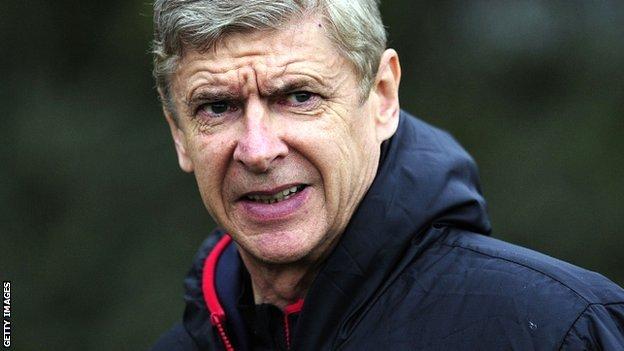 Arsenal manager Arsene Wenger has told his side they cannot afford to relax against already-eliminated Montpellier in the Champions League on Wednesday.

A win for the Gunners, combined with victory for Schalke over Olympiakos, would send them through to the last 16.

"Not for a second would I think the team will be complacent - they will be full of desire," said Wenger.

"Montpellier had a slow start, but they have rediscovered their balance over the last few months."

The French side have struggled in Group B since losing

They have collected only one point, via a 2-2 draw away to Schalke, and have been cut adrift at the bottom of the standings.

Their form in their domestic top flight is scarcely better.

Currently they are 14th in the French league, although they are unbeaten in their last four league games.

Wenger's side come into the match on the back of and, while the Frenchman hopes his side can produce a similar performance, he also expects another open game.

"It is important on the back of the Tottenham game we show another good performance and a resolute attitude, that is at stake for me," he added.

"After, if we produce the quality performance, we will win the game.

"A draw is not good for either side."