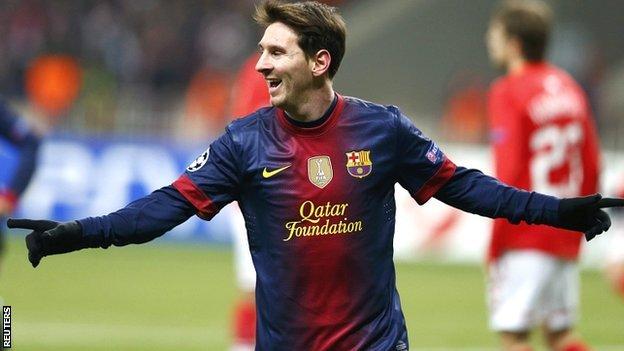 Lionel Messi scored twice as Barcelona booked their place in the Champions League last 16 with a 3-0 win away to Spartak Moscow.

Bayern Munich pegged back Valencia as Thomas Mueller levelled in a 1-1 draw that takes both through from Group F.

Shakhtar Donetsk's 5-2 win over Nordsjaelland, combined with their superior head-to-head record against Chelsea, ensured that they cannot be denied their place in the last 16.

Brazilian striker Adriano scored a hat-trick in the victory but his first prompted an angry reaction from the Danes.

Play was stopped with a Nordsjaelland player down injured. Shakhtar midfielder Willian then attempted to return the ball to the opposition goalkeeper from an uncontested drop-ball, but Adriano collected the ball and scored.

There was then confusion when Nordsjaelland kicked off, with Shakhtar initially standing off and allowing them to dribble toward goal before making a tackle and playing on.

Chelsea, will become the first defending champions to fall in the group stages if the Serie A leaders manage a draw away in Donetsk in their final game.

BATE Borisov's hopes of keeping some qualification issues on the line in the final round of matches were finished as they surrendered 2-0 to Lille. They were the French side's first points after four successive defeats.

Messi scored his 79th and 80th goals of 2012 to move within five of Gerd Muller's 1972 record haul of 85 in a calendar year as Barcelona recovered from their defeat to Celtic in the previous round of matches.

Benfica visit the Nou Camp next and will advance at Celtic's expense if they can match whatever the Bhoys manage at home to the already-eliminated Spartak Moscow.

Ezequiel Garay scored the decisive goal in Lisbon falling short of the draw that would have tied up their place in the next stage.

The Turkish side go into the final round of the matches level with Cluj on seven points after a first-half hat-trick from Cluj's Rui Pedro put qualification beyond Braga.

Galatasaray travel to Braga on the final day, with their passage dependent on matching whatever Cluj produce at Old Trafford.