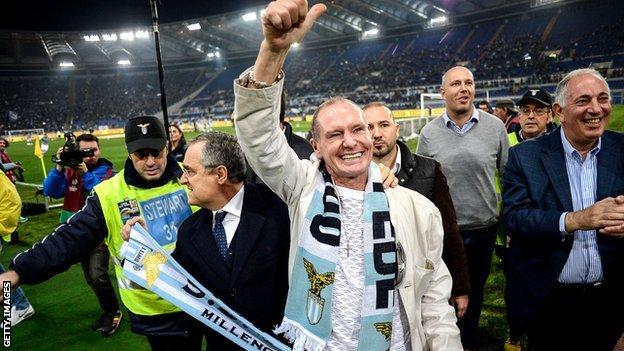 Former England star Paul Gascoigne was moved to the brink of tears as he returned to Rome for a match between two of his former clubs on Thursday.

He was Lazio's guest of honour for their Europa League game against Spurs.

The 45-year-old donned a light blue-and-white scarf, the colours of the Italian side, and was paraded in front of the crowd before kick-off.

Gascoigne had looked set to miss the tie at the Stadio Olimpico in Rome after being booked to speak at an event in the UK on Friday.

But, despite a fear of flying, he caught a plane to Italy and appeared in front of a crowd of 20,000.

Gascoigne scored six times for Lazio, including a late equaliser in the Rome derby against Roma in November 1992.

He had declined an invite to September's reverse fixture at White Hart Lane, which ended in a goalless draw, due to "personal reasons".

But his agent, Terry Baker, confirmed on Tuesday he would be flying to Italy after Lazio's general manager, Maurizio Manzini, invited him back to Rome.

Former Newcastle and Rangers player Gascoigne has struggled with alcohol problems since retirement.

But Baker said Gascoigne was in good shape thanks to a rigorous exercise routine that saw him spend two hours a day in the gym.