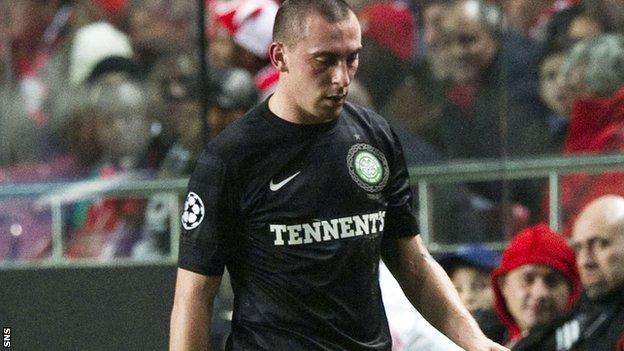 Celtic captain Scott Brown will delay an operation to keep playing until the club's crucial Champions League match against Spartak Moscow on 5 December.

Lennon predicted the post-operation recovery period would be eight weeks.

Following that match, Lennon said that he felt the Scotland international had "run his course" and that he had "been pushing himself to the very limit".

But with key midfielder Victor Wanyama's suspension ruling him out of the Spartak match and Celtic needing to better Benfica's result at Barcelona in the final round of group games to continue their Champions League campaign, Lennon and Brown have opted to delay the operation.

"Scott Brown is in contention to play tomorrow remarkably," said Lennon. "We will refer him after Moscow and see how he is.

"The problem is we don't have the time to let him settle down.

"Looking at the condition, it normally requires surgery.

"The problem on Tuesday night was he was just out of condition a bit because he has not been training.

"He has trained in the last couple of days and we are doing some physical work and see what reaction we get."

Celtic have a Scottish Premier League match at Hearts and a home Scottish Cup tie against Arbroath sandwiched between the Inverness and Spartak games.

The manager has been using Scotland midfielder Brown sparingly at times this season to save him for Celtic's more important fixtures.

"We have known going into some games that he couldn't last the 90 minutes but we have taken that chance because he is such an important player," added Lennon.

"But obviously we would like him feeling completely free going into these games and that's why we are upping his condition work a bit to see if we can get him peaking for the Moscow game if we can."

If Celtic need to better Benfica's result at Barcelona to progress to the last 16 of the Champions League. If they don't they will still drop into the Europa League.