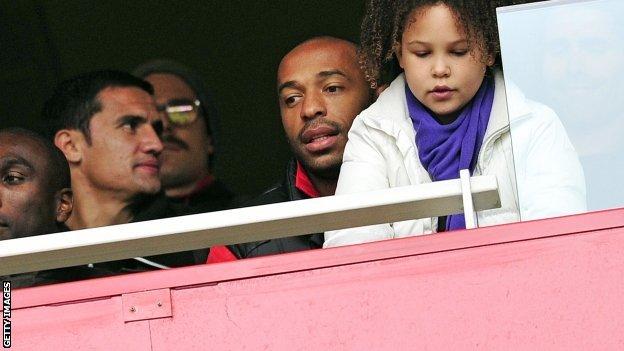 Arsene Wenger said he is not ruling out former striker Thierry Henry having a third spell at Arsenal.

The 35-year-old has been training at the Gunners' Hertfordshire base to maintain fitness following the end of his MLS season with New York Red Bulls.

Wenger said: "Will I sign him again in January? I don't rule it out. I don't know if he is interested. He is sharp."

Wenger said Henry's arrival could again compensate for the absence of Ivory Coast forward Gervinho at the start of 2013.

He said: "We will lose Gervinho again as they are playing in the African Cup of Nations two years in a row, so we will be confronted with a shortage particularly if [striker] Marouane Chamakh should go. I cannot stand in his way, then we will be short."

Wenger added: "You know what Thierry gives you; he gives you hope, especially when he comes on, that is the most important thing.

"Thierry is a communicator, an extrovert, very intelligent. He can only give good advice to players because he was in their position when he arrived here.

"I think now this team has an exceptionally good character. There are not many flashy boys. What is the most important thing is not whether you are an extrovert, but what it means to you to do well, your job, your will to win."