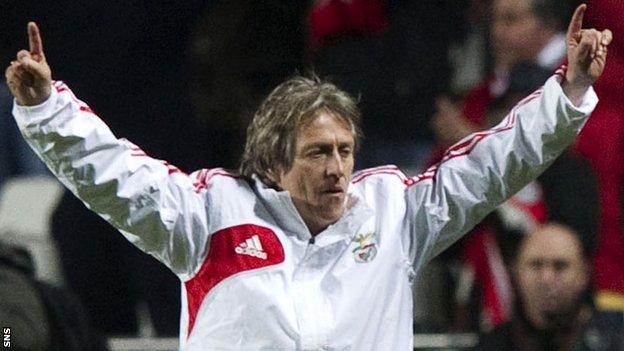 Benfica coach Jorge Jesus will take heart from Celtic's win over Barcelona in Glasgow earlier this month when he takes his side to the Nou Camp.

The Portuguese side beat Celtic 2-1 at home to overtake the Scottish champions in Champions League Group G.

They must now at least equal Celtic's result at home to Spartak Moscow to qualify for the last 16.

"We have shown we are more of a team than Celtic and they beat Barcelona, so nothing is impossible," said Jesus.

"It was a great win for us. We didn't deserve to be drawing at half-time.

"They scored with a set-piece, as we thought they might, but we played very well."

Benfica and Celtic are tied on seven points, with the Portuguese having a better head-to-head record having drawn in Glasgow, five points behind group winners Barcelona.

With Spartak having lost 3-0 to Barca in Moscow, it is left to Benfica and Celtic to battle it out for a place in the knock-out stages or drop into the Europa League for finishing third.