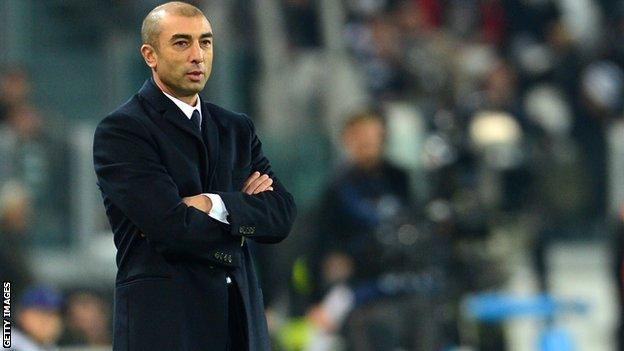 Chelsea manager Roberto Di Matteo took responsibility for the 3-0 defeat at Juventus which leaves the Blues on the brink of a Champions League exit.

If Juve draw away to Shakhtar Donetsk on 5 December, Chelsea will be the first defending champions to be eliminated in the group stages.

"If anyone has to take blame, it's me. I selected a team I was convinced would win or at least draw," said Di Matteo.

"We have hope. Mathematically it is still possible for us."

Di Matteo signed on the back of winning the Champions League and the FA Cup as caretaker, but is under pressure in the midst of a patch of bad form that has seen just two wins in their last eight matches.

Chelsea's defence of their European title is now out of their hands with Juventus needing just a point from their trip to Ukraine against already-qualified Shakhtar to make the last 16.

Di Matteo, 42, accepts that the run of bad form will inevitably lead to questions over his future, but he insists that he does not need any public backing from the club's hierarchy.

"In a big club like this if you have a few bad results of course you are under pressure and everything will be questioned," he said.

"We are in it together, we had a long journey to where we are today."

When asked whether he needed a vote of confidence from the club's owners he added: "No, I don't need that, the fact they put trust in me in the summer, that's enough for me."

The Italian, who made 175 appearances for the club as a player, has not been able to coax Fernando Torres back to top form with the Spanish striker failing to replicate the form that convinced owner Roman Abramovich to spend a club record £50m on him in January 2011.

Di Matteo opted to demote Torres to the bench against the Serie A leaders, but, with Eden Hazard deployed furthest forward, his side rarely threatened.

"The player is disappointed when he doesn't start of course," Di Matteo added of Torres.

"We have to pick ourselves up again, we have another massive game on Sunday and if we win we could be back in title race."