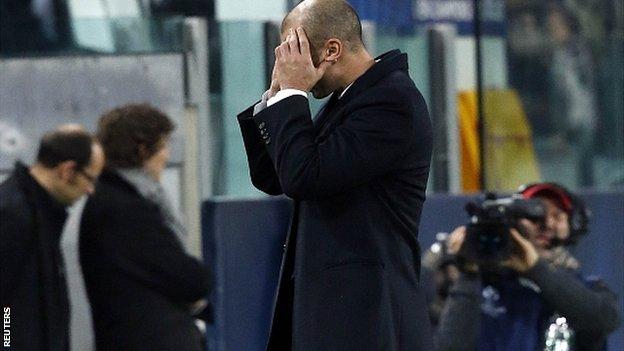 Roberto Di Matteo cut a lonely figure as the final whistle rang out at the Juventus Stadium on Tuesday, but at Chelsea the manager has always walked alone.

This comprehensive defeat, inflicted by a ruthless Juventus team, left the Italian's position under scrutiny just six months after delivering the European and FA Cups to Stamford Bridge.

Night to forget for Chelsea

The performance in Turin was a pale imitation of the displays that Di Matteo inspired from his players en route to a famous victory in Munich last May.

Chelsea's impressive early-season swagger has been replaced by an anxious stagger in recent weeks and this result left Roman Abramovich facing the embarrassment of his club becoming the first reigning champions to be eliminated from the Champions League at the group stage after a run of just two wins in the past eight games.

Football has a nasty habit of throwing up the tough fixtures when you least want them - top-of-the-table Manchester City are the next visitors to Stamford Bridge on Sunday. "There will be some tough questions for Roberto Di Matteo," BBC Sport's Danny Mills said.

"But at the weekend they've also got a massive game against Manchester City. If they lose that, well, Mr Abramovich may be having a meeting with Mr Di Matteo."

It took Di Matteo more than an hour to appear for his post-match media duties in Turin but when he appeared he faced down the difficult questions, answering them with honesty and dignity. It cannot have been easy for him, accepting the job on a permanent basis knowing the spectre of Pep Guardiola loomed in the background.

"At the moment I am here and I think I will be here for the future. It's not a question you should ask me," Di Matteo said.

"At a big club like this, if you have a few bad results of course you are going to be under pressure. It was the same from day one. You have to live with it, pick yourself up, pick the players up and try to win your next game.

When asked whether he needed a vote of confidence from the club's owners he said: "I don't need that, they put trust in me in the summer, that's enough for me."

"We live in a world that is completely emotional. You have one defeat and you listen to people: they say 'get him out, get the player out, get the manager out'. Now they speak of Roberto Di Matteo. He's just won the Champions League and the FA Cup three months ago!"

But it is hard to believe that former Barcelona coach Guardiola would have found it any easier to succeed in this Champions League group with a Chelsea team lacking the experience and leadership of John Terry and Frank Lampard and having waved goodbye to the warrior spirit of Didier Drogba.

"Chelsea lacked character and presence," Mills added. "They need to find a replacement for John Terry and Frank Lampard, who are coming to the end of their careers, and they need to replace Didier Drogba with a striker who will work hard. They have been left with just Fernando Torres and that makes things very difficult."

Long-term thinking has been in short supply since Jose Mourinho's departure in 2007. A manager needs time and control to reform and revolutionise. Andre Villas-Boas had neither and Di Matteo is already walking a tightrope. The challenge of ensuring results do not slip while making the kind of long-term progress that neither Carlo Ancelotti nor Villas-Boas could manage is the ultimate challenge for any manager.

But it was made more complicated still when, having won two trophies with on a bedrock of defensive organisation and hard work, Di Matteo was asked to adapt his team into a more fluent attacking force in keeping with Abramovich's blueprint for a team containing three playmakers. Barca in Blue.

Di Matteo's blending and embedding of Juan Mata, Oscar and Eden Hazard into the team was celebrated in the season's early months as Chelsea won seven and drew one of their opening eight Premier League games. And yet November has proved the undoing of Chelsea for a third season in the last four.

But Abramovich is not a man to indulge failure of any kind, as demonstrated by the cycle of decisions that have led to the departures of Avram Grant, Felipe Scolari, Carlo Ancelotti, Villas-Boas. Success is what the Russian billionaire craves above all else even from the manager who sated his craving for the Champions League in such dramatic style last May.

That, among other things, was what Di Matteo was charged with when he took charge as caretaker manager last March. It was a fairly simple job description: break up the old alliances and the culture of cliques and player power, rebuild and rejuvenate an ageing squad and establish an on-pitch philosophy perfected by Barcelona.

When he took over, Chelsea were in a mess. The dressing room was divided by their alliances for and against their manager. The belief had begun to drain away and with it the defensive organisation that had become the bedrock of the club's success during much of the past decade.

And yet despite all that, it has granted him very little breathing space just three months into the new season.

As Di Matteo himself admitted, much now depends on the whim of Abramovich.