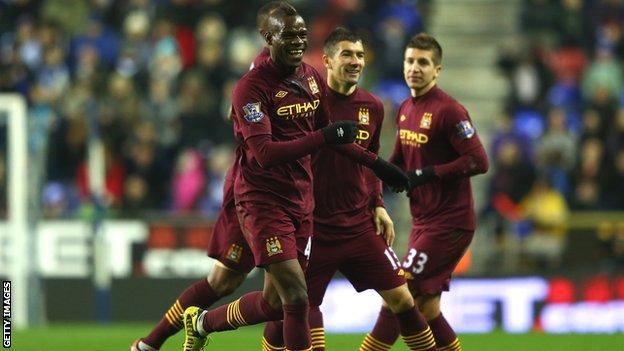 Mario Balotelli marked his return to Manchester City's starting line-up with the crucial opening goal in their hard-fought win over Wigan.

The Italian striker, out of favour and then injured for most of the last month, gave City the lead against the run of play with 21 minutes left, burying the loose ball after Ali Al Habsi's double save.

James Milner's fierce strike moments later made sure of a victory that keeps City only a point behind Manchester United at the top of the table, but this was a far from straightforward win.

Their unbeaten start to the season looked under serious threat during the second half until Balotelli struck, with the Latics enjoying long spells of pressure.

City, who have struggled for goals and wins on the road this season, looked lethargic and short of ideas for long stages.

And, until Balotelli struck for his first league goal since the end of March, his manager Roberto Mancini cut an increasingly unhappy figure on the touchline.

Mancini's side are rock solid at the Etihad Stadium, but had scored only seven times in their six previous away league games, with their lack of goals costing them vital points in the title race.

Balotelli was initially unable to change that, largely because he received so little in the way of service.

City were wasteful on the ball and misplaced too many passes when they came into Wigan territory. Even David Silva, usually so reliable at finding a team-mate, was lacking his usual zip.

The champions still had the occasional sight of goal early on and Sergio Aguero and Maicon both flashed shots just wide after escaping down the flanks.

But, until Yaya Toure fought his way down the left by-line on the stroke of half-time and fired in a shot that Al Habsi parried at his near post, the Latics looked comfortable.

Roberto Martinez's side were not just sitting back and soaking up the pressure, either. Joe Hart had to help an Arouna Kone header over the bar and Jordi Gomez sent a free-kick whistling a fraction wide.

City did come out with more purpose after the break, but Balotelli was wasteful when he met Maicon's cross at the back post but sent his header bouncing well wide.

Wigan were still creating the better openings and Kone's finishing was just as poor when he nodded Ronnie Stam's cross wide.

Manchester City are the only team in the top four divisions of English football who have yet to lose a league game in 2012-13.

The Latics went close again after the hour mark when Jean Beausejour's cross flew right across goal and Gomez, arriving late, was unable to steer it goalwards.

By now the home side were on top and a point looked a decent return for City, who would have been mindful of Manchester United's catastrophic defeat here last spring.

They went home with all three, mainly thanks to Balotelli. Gareth Barry's shot from the edge of the area was blocked by Al Habsi and, although the Wigan keeper stopped Balotelli's first follow-up, he could do nothing with his second strike.

The Latics kept coming forward but their hopes of getting anything from the game disappeared when Milner made it 2-0, beating Al Habsi with an unstoppable shot into the top corner.