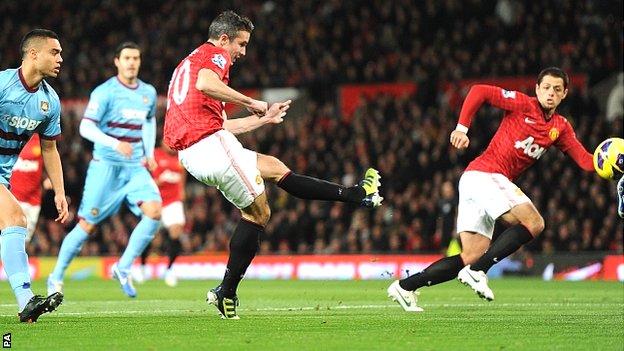 The Dutchman struck his 12th goal in all competitions with an effort that deflected in after just 32 seconds.

Carlton Cole and Modibo Maiga went close, but the hosts held out.

The result maintains Manchester United's one-point advantage over Manchester City and takes them seven points clear of Chelsea and West Brom in third and fourth.

West Ham, meanwhile, drop to 10th and the season does not get any easier, with December featuring matches against Chelsea, Liverpool, West Brom, Everton, Arsenal and Reading.

While the Hammers arrived as firm underdogs, they could take heart from an impressive start to life back in the top flight.

They may also have been pleased to learn that the last promoted club to leave Old Trafford with a league victory - Bolton in 2001 - were managed by Sam Allardyce, with Kevin Nolan on the scoresheet.

But Allardyce and Nolan knew their current side faced a daunting assignment against a team who had won six of their previous seven top-flight games and each of their past seven against West Ham.

Michael Carrick found his team-mate on the edge of the box and the striker lifted the ball over Winston Reid before beating Jaaskelainen with the help of a heavy deflection off James Collins.

Given that Manchester United had conceded the first goal in nine of their 13 league matches coming into this one, Van Persie's opener should have helped to settle any early nerves.

However, a line-up including five changes from the weekend failed to maintain the momentum and that gave West Ham confidence.

Despite making four alterations of their own, the Hammers worked hard to restore parity and after Nolan put Matt Taylor's free-kick into the side-netting Carroll fired narrowly over the bar.

They lacked a cutting edge up front, though, and Jaaskelainen made a fine low save from Hernandez to keep West Ham within touching distance of their opponents going into the break.

West Ham made a positive start to the second half but, again, struggled to mount a sustained challenge.

The hosts responded by pushing forward themselves and Jaaskelainen tipped Rooney's curling strike round the post before repelling a Carrick header from Van Persie's corner.

Allardyce replaced Carroll with Cole and the substitute made an immediate impact - setting up Matt Taylor for a chance that was wasted and drawing a crucial close-range stop from Anders Lindegaard.

As the crowd grew restless another replacement, Maiga, hit an angled drive over the bar, but West Ham could not force an equaliser.