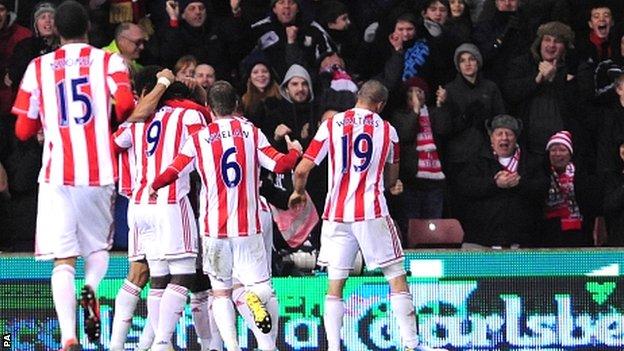 Newcastle slid to a fourth successive league defeat for the first time since 2008 as Stoke came from behind with two late goals in four minutes to go ninth.

Following a forgettable first half, Newcastle went ahead when Papiss Cisse converted a rebound after Demba Ba's shot was parried by Asmir Begovic.

Newcastle had chances for a second but Jon Walters equalised with a glancing header from Cameron Jerome's cross.

Jerome hit the winner after a knockdown from fellow substitute Kenwyne Jones.

Cisse's only previous league goal this term inadvertently deflected in off his rear end when Newcastle last recorded a league victory against West Brom at the end of October, and it seemed as though he might have provided a morale-boosting win again.

Given their wretched run, a midweek visit to have their feathers ruffled by Stoke, unbeaten at home since February, was a far from ideal assignment for the Magpies, again significantly weakened by the absence of influential midfielders Yohan Cabaye and Hatem Ben Arfa through injury.

But roared on by the Toon Army, they looked neater in possession and were largely inconvenienced in the first period.

The game was littered with misplaced passes, however, with Newcastle defender Mike Williamson's skewed clearance against his own post the closest to breaking the deadlock before the break.

Matthew Etherington was clear down the left flank but his centre was over-hit and too far in front of the well-placed Charlie Adam in the area, rather summing up the opening period.

Two players sustained nasty cuts in separate incidents and both were from Stoke, Geoff Cameron returning with a new shirt but Peter Crouch forced off after losing teeth when caught by Fabricio Coloccini's stray arm in an aerial challenge.

The game was in urgent need of a goal and it came from the visitors, who hustled Glenn Whelan out of possession to allow Ba to fire a low effort that bounced awkwardly in front of Begovic and Cisse was alert to hook in left-footed off the inside of the post, scuppering Stoke's hopes of a sixth clean sheet at the Britannia Stadium this term.

With the home side struggling to find a way back into the contest, Newcastle had penalty claims for handball swiftly dismissed, while Cisse might have added a second when he sprinted clear to collect goalkeeper Tim Krul's long clearance, but his angled shot was pushed aside by Begovic.

The goalkeeper then saved with his legs in an almost identical scenario when Ba broke through.

Those saves proved crucial as Stoke finally exerted some sustained pressure, and moments after Jones headed straight at Krul, Jerome crossed for Walters to get in front of his marker and direct a header into the top corner.

The tide had turned, the hosts sensed victory and it duly arrived when Jones knocked a long ball down invitingly for Jerome to slot home first-time from 15 yards.

It extended Stoke's unbeaten home record to 14 matches and ensured increased concern for Newcastle, who remain without an away win this season.

"We won't get carried away, we've had a couple of very good results at home, to take six points from Fulham and Newcastle is very, very pleasing but at this football club whether we're third from bottom or ninth it makes no difference, we just carry on what we do and we do it to the best of our ability.

"We were unlucky first half with the one that hits the post, if that goes in it takes some pressure off, and when they score from a mistake by Asmir [Begovic] who should do better than that, you think it's not going to be your night.

"Couple of substitutions, Cameron Jerome and Michael Kightly added some pace and power to it and I think in the end we deserved to win the game.

"Cameron and Kenwyne [Jones] haven't played many games this year but their attitudes have been first class. It's very difficult keeping players happy who are not in the team but Cameron has shown his class, it was a great finish, the crowd were at their best and they almost suck the ball into the net."

"After 75 minutes we were bossing the game, 1-0 up looking like we were going to get a second, I thought we had a definite penalty that wasn't given, and two sucker punches have cost us.

"I feel so sorry for the players because it's been a tough little spell for us with the blows we've had on the injury front and we've put in a really great performance here and ended up with nothing, it's hard to look your players in the eye and say you've carried the gameplan through and got nothing.

"Obviously goals do change the situation but I felt the least we deserved was a draw so the second goal was a real bad one.

"It's the run of results that's the problem and we've got to stop that, we couldn't have done anymore to stop it tonight and unfortunately we've just come up short, the players were magnificent tonight, I couldn't say that Sunday but I can tonight.