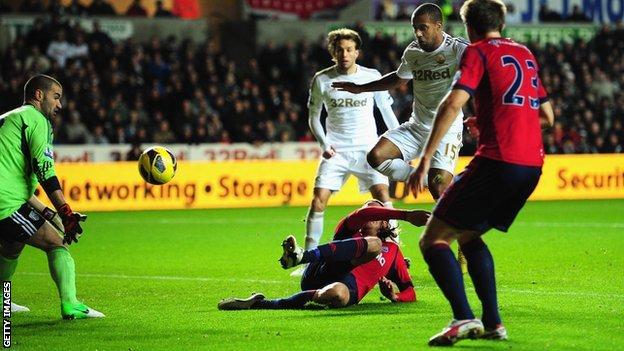 Michu took his goal tally to eight from close range and Routledge deflected in after Jonas Olsson failed to clear, before netting a sublime second.

Routledge at the double

The away side failed to produce any clear cut chances in the second half, as Spaniard Michu came close to adding another late on.

West Brom's superb start to the season was blown away by a Swansea performance that saw them outpass and outclass their opponents.

Manager Steve Clarke has been receiving plaudits for the way he has started his managerial career and the Baggies had been tipped for a European competition spot after their impressive start. But on this form, the Scot will need to re-evaluate his side's chances of a top six finish in May.

On the other hand, Michael Laudrup's men have suffered just one defeat in their last eight league games, and look well set to build on their excellent debut season in the Premier League.

Pablo Hernandez, a summer signing from Valencia, was central to everything the Swans created, typifying the team's ethos; calm, collected and extremely comfortable every time he was in possession.

The home side started brightly with their crisp, passing style of play, a pattern that continued throughout the first half.

Spaniard Hernandez linked up with Michu early on and the Swans forward struck the foot of the post.

Swansea last scored a goal in the opening 45 minutes of a match against Sunderland on 1 September, before netting three in the first half against West Brom

It was the same combination that gave the home side the lead, as Nathan Dyer's cross was knocked back by Hernandez for a simple tap-in for Michu.

And their blistering start enabled them to make it two within the opening 11 minutes. Hernandez's trickery was West Brom's undoing as he skipped past two defenders before laying on for Routledge who bundled home after Olsson's attempted clearance.

After winning their previous four games, West Brom were in unfamiliar territory. Lukaku was stranded up front on his own and Peter Odemwingie could only fire a shot towards Gerhard Tremmel's goal out of frustration.

Swansea went further ahead with Hernandez involved yet again, laying on Ben Davies. The left-back found Routledge, who nonchalantly struck a first-time finish with the outside of his foot.

Having created nothing all half, West Brom somehow managed to get back into the game on the stroke of half time with an emphatic finish from Lukaku after Chris Brunt's corner.

The visitors attempted to claw their way back into the match but came up against a resolute Swansea defence.

In fact, it was Swansea who should have extended their lead as Michu flashed a header wide, before stinging the palms of Boaz Myhill.

"The first half was one of the few times as a manager that you are just watching the game, it was a delightful, it was fantastic.

"We also saw the quality and attitude but the mental part is important too because they scored late in the first half.

"It was a great team performance and I don't want to single out any individual performance.

"Everybody was great to watch. We have the momentum and we want to keep it now."

"At 3-0 down you are a long way from getting anything from the game.

"The goal gave us a glimmer of hope but we move on to the next game now.

"Swansea are a really good team and we knew it would be difficult and they proved that."