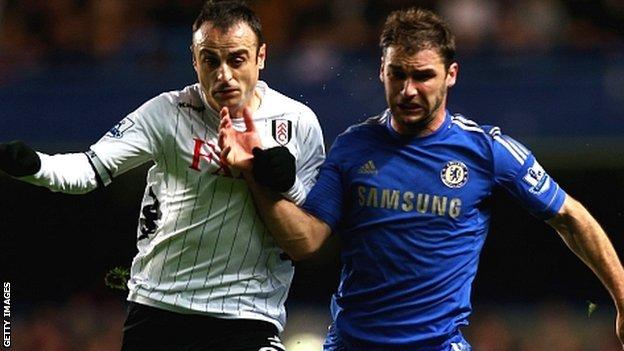 Rafael Benitez is still seeking a first win and goal since taking charge of Chelsea after Fulham battled to earn a point from a tedious west London derby.

The home fans had greeted their new manager with widespread booing during his first game in charge against Manchester City on Sunday, but they laid off him before this match.

A second uninspiring display and goalless draw in four days, though, meant the jeers erupted around Stamford Bridge at the full-time whistle, the hosts' winless run stretching to six games.

meant that the result was enough to carry the Blues up to third in the league, but at the same time the gap between them and leaders Manchester United extended to seven points.

Chelsea dominated possession for much of the game but Fulham, who fully deserved their point, created as many clear chances and left-back John Arne Riise had two good opportunities to earn maximum points after the break.

A fixture played against such a dissatisfied backdrop was seemingly perfect for Fulham.

The sell-out away support were always going to cherish every moment of the turmoil, unrest and upset which has embroiled their local rivals in recent weeks.

Roberto Di Matteo's sacking, the fury at Benitez coming in as his replacement and the messy Mark Clattenburg affair gave Fulham fans plenty of ammunition to goad their neighbours.

But the off-field shenanigans did nothing to inspire the visitors or provoke a wounded home side in a desperately dull first half.

Fulham sat deep and allowed Chelsea plenty of possession but the hosts could barely muster a worthwhile attempt.

Brazilians Ramires and David Luiz saw shots fly way off target, while the misfiring Fernando Torres came closest with a neat turn that could only produce a tame strike on goal.

At the other end Fulham forward Hugo Rodallega had a decent shot from distance easily saved by Petr Cech.

But what little entertainment there was came from the fans, who spent most of the first period questioning each other's lack of support, lack of trophies or willingness to sack managers with alarming regularity.

And while Benitez escaped the expected hostile reception witnessed at the weekend, many more performances like this and he may not see out his short-term contract.

His decision to leave crowd favourite Juan Mata on the bench deprived Chelsea of their most creative player on a night when they desperately needed him.

A brilliantly organised and packed away defence coupled with a lack of adventure going forward allowed precious little space for Oscar and Eden Hazard to operate.

Chelsea continued to dominate possession and territory after the interval but the chances still would not come.

Branislav Ivanovic did glance a header wide and Torres had a goalbound half-volley cleared by Aaron Hughes.

But Fulham grew in confidence in the latter stages and two great chances fell to Riise.

The Norwegian wasted the first after racing clear following a swift break but he was unlucky with his second attempt when his fierce strike produced a fine low save from Cech.

And although the game opened up in an increasingly frantic final 10 minutes, neither side could find a winner.

Fulham manager Martin Jol: "We could have nicked it and that would have been bad for them and great for us.

"After the game, everyone said Berbatov was fantastic, and he was, but the other players worked every so hard."