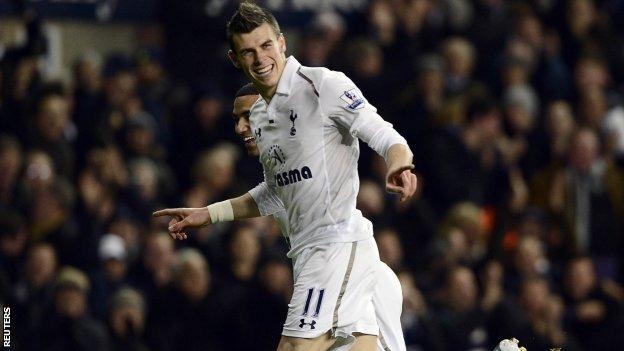 First-half goals from Aaron Lennon and Gareth Bale were enough to give Tottenham victory over Liverpool in a superb encounter at White Hart Lane.

Lennon opened the scoring inside the first 10 minutes when he tapped in Bale's low cross from the left at the far post.

Liverpool pulled one back when the unlucky Bale headed into his own net.

Buoyed by that lifeline, the Reds pressed hard for an equaliser. Striker Luis Suarez went close with a volley following great acrobatics from Daniel Agger, while Jose Enrique, who almost scored on two other occasions, saw his shot drift inches past the post.

The victory moves Spurs above Arsenal and into the top five, with Liverpool down to 12th.

In the previous 40 Premier League encounters between the teams, 109 goals had been scored at more than 2.5 goals per game, while both Liverpool forward Suarez and Tottenham counterpart Jermain Defoe had the most shots on target - 34 and 30 - in the top flight this season.

And once again the teams delivered during another fascinating Premier League encounter.

Bale shone brightest in the early stages. The Wales left-winger forced Reina into an ungainly save from his free-kick before launching a trademark angled shot, which went wide by two feet.

But on his next foray forward, Spurs scored. Yet again Bale embarrassed Liverpool down the left with his pace and picked out Lennon with a surgical pass, the England international tapping in at the far post.

Tottenham were on the rampage and they got their second nine minutes later when Reina failed to judge the flight of Bale's free-kick and he was left rooted to the spot as the ball flew in.

The potent Suarez, who also has fired in the most shots of any player in the league this season - 69 - had tested Hugo Lloris in the first 10 minutes with a low shot, before going even closer later in the opening half.

On that occasion the sprightly Uruguayan flicked the loose ball towards goal after Lloris had come out to block Steven Gerrard's shot, only to see Kyle Walker win the race to the line and hook his effort to safety. It was a magnificent piece of defending by the England international.

The Reds claimed Gerrard was fouled by Mousa Dembele in the build-up, but referee Phil Dowd waved away appeals.

Liverpool midfielder Jordan Henderson, who was later substituted, also missed an open goal from 20 yards, but he was under pressure from the Spurs defence, while Enrique had his turn-and-shot saved by France keeper Lloris.

Enrique, who attacked at nearly every opportunity, also went close midway through the second half when his shot from eight yards was deflected wide for a corner.

The Reds finally made their breakthrough from the resulting set-piece when substitute Jonjo Shelvey's corner from the right was flicked on to Gerrard by Daniel Agger.

The England midfielder directed his headed effort towards goal, where Lennon hacked it off the line, but the ball smashed into Bale two yards away and he inadvertently headed into his own net.

Liverpool were on top in the closing moments but a combination of fortune and good defending ensured Spurs earned a second consecutive league win.