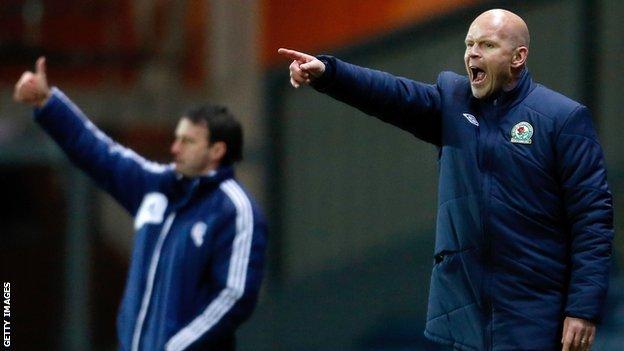 Davies struck after only two minutes against his old club, lashing home after being played in by Chris Eagles.

The Bolton winger was influential throughout, forcing fine saves from goalkeeper Paul Robinson, as Lee tapped home the second from close in.

Colin Kazim-Richards came on and set up striker Jordan Rhodes to head home a consolation effort in the 82nd minute.

Bolton had drawn their last four games, and would have been delighted to get the win over their bitter enemies.

On the other hand, Blackburn have now lost their last two games and are four points adrift of the play-off spots.

Manager Henning Berg has overseen inconsistent results since taking charge of Rovers but Dougie Freedman's Bolton side were driven forward by an impressive performance from Eagles.

The former Manchester United player's incisive pass enabled 35-year-old Davies to open the scoring early on, and the winger also tested Robinson with a long-range drive and venomous volley.

With the away side on top, Danny Murphy smashed over an effort in Blackburn's only chance of the first half.

Blackburn had Robinson to thank again, as he saved well from Jacob Butterfield, and they were given a lifeline when Scottish international Rhodes bagged his 15th of the season for club and country.

The 22-year-old could have been the hero by rescuing a point late on, but could not scramble home the equaliser.

"To start the game like we did was very, very surprising, I must admit. We're playing a local derby, we're playing against a team we played in the Premier League last season and we give them that much space.

"We have enough experience to know that when we start the way we do we give ourselves a mountain to climb and at the moment we're not good enough to get back into it.

"It can't be too difficult [to pick the players up], we're playing Burnley [in a derby on Sunday]. Everybody knows what that means for everybody - the fans, players, staff - and if you can't pick yourself up for a game like that you shouldn't be in football."

"That's been the best performance [of the season] in terms of all-round performance. I think we've actually played decent at Blackpool but I think as an all-round performance - defending very well at the end and our passing and moving - we played quite expansively with two wingers and I felt that we created opportunities.

"But I've been seeing it at the training ground. The lads have been working terrifically well, they've really responded to the methods.

"He [Chris Eagles] has been performing very well - let's not tell him that, knowing Chris. He's a good guy, he's a fine football player who's still getting better."