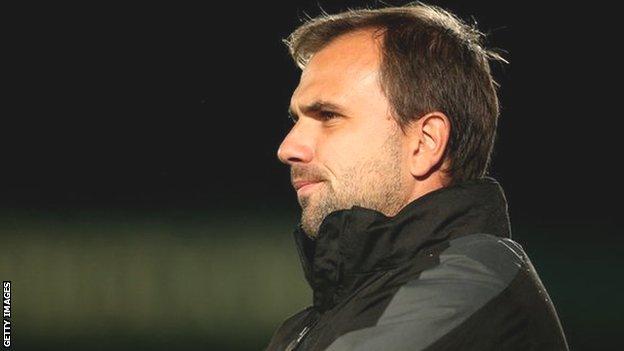 Plymouth Argyle manager Carl Fletcher says his side are "not getting the rub of the green" as he comes under increasing pressure.

was the club's seventh game without a win and the Pilgrims are now just two points off the League Two relegation zone.

"The only thing people will look at is the results and that's the business we work in," Fletcher told BBC Devon.

"The lads are working hard, we're not getting the rub of the green."

The lads are working so hard for one another, trying to do the right things

Since then, they have collected just one league point in six games and also been dumped out of the FA Cup by

"Sometimes that happens in football and you just have to deal with it," Fletcher said.

"Whatever happens, happens, whether I'm here or not, I've got a great family at home."

"The teams we've played recently are all in the top four and odds-on for promotion and play-offs," continued Fletcher.

"We stood up and have been counted and the important thing is the lads themselves don't get too down about it.

"We've got to take the positives from some of the performances and it will turn around for us because that's the way football is.

"The lads are working so hard for one another, trying to do the right things.

"Their reactions and the way they're just getting on with it, digging in and doing all the hard work, it's a shame they're not getting anything out of it as a reward.

"Some games you play and you don't play very well, you get completely dominated and end up winning the game.

"Other games you do really well, have a good performance and you don't win the game, that's just the way it's going for us at the minute."