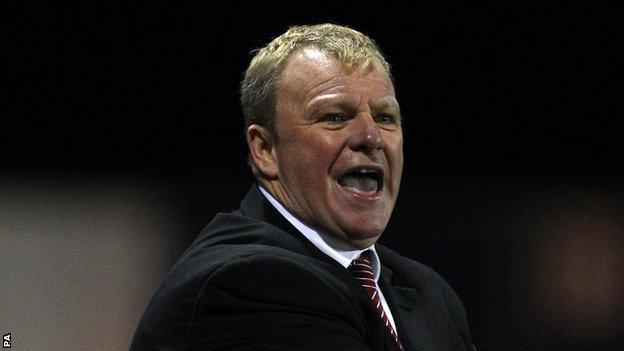 Rotherham manager Steve Evans says the club's injury crisis has left him playing "a reserve side".

The Millers lost 3-2 at home to struggling Wycombe on Tuesday to leave them with just one win in four.

"We're playing a reserve side and reserve sides won't win promotion from League Two. They're not good enough to be in a promotion side."

Evans said the club had agreed to extend the loan of midfielder Lee Frecklington from Peterborough, but may have to reconsider after he was forced off with a back injury.

Fellow loanee Josh Morris was stretchered off after a heavy tackle meaning the Millers finished the game with 10 men.

Evans is now concerned about what kind of team he will be able to send out at Exeter on Saturday.

"You could cry couldn't you because we don't have enough players to go to Exeter on Saturday," he continued.

"We need our best players and none of them will be back for the weekend."

In response to Morris's injury, Rotherham have recalled defender Johnny Mullins from his loan spell at Oxford United.