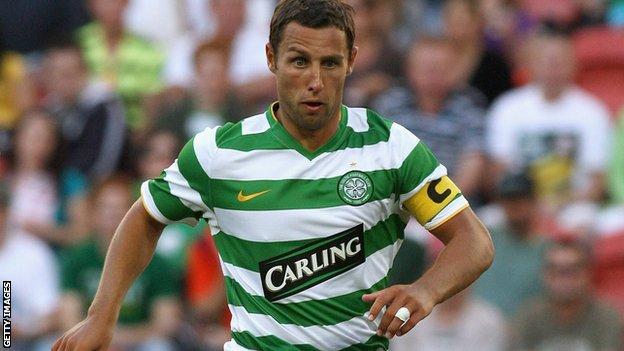 Former Celtic striker Scott McDonald believes the club can beat Spartak Moscow and progress to the last 16 of the Champions League.

The 2-1 defeat by Benfica means Celtic must better the Portuguese club's result in the final game in Group G.

Neil Lennon's side face Spartak at Celtic Park, while Benfica travel to Barcelona.

"Beating Spartak over in Russia was a huge result and, after that, I think they'll be full of confidence."

Goals by Ola John and Ezequiel Garay either side of Georgios Samaras's header saw Benfica secure victory and move level on points with Celtic.

However, the Portuguese outfit are ahead of Neil Lennon's side on head-to-head games and Celtic will rely on Barcelona avoiding defeat against Benfica at the Nou Camp.

McDonald, who starred for Celtic for a three-year period from 2007, is confident his former club can progress.

"Celtic's home record speaks for itself and I think even a point would do," he said. "They have to better what Benfica do.

"I think it's going to be another special night at Celtic Park. There have been quite a few in recent years and, hopefully, this is another one.

"Against Barcelona there was nothing to lose, but on this occasion there's everything to lose.

"It will be interesting to see how the players react. [Victor] Wanyama being suspended and possibly Scott Brown not playing as well will be a huge loss."

McDonald said the Celtic supporters have a huge part to play when the Russians visit Glasgow.

"When things aren't going your way and the crowd lift then it gives everyone on the pitch a lift," McDonald said. "It certainly is like a 12th man out there.

"You feel invincible at times and I'm sure the players would agree and are looking forward to the challenge once again.

"Neil will have his troops more than ready for the task ahead."

McDonald said Lennon had given the Celtic squad belief and that last season's Europa League campaign had bolstered their confidence.

"They have carried that on this year and have been superb away from home," he added.

"Unfortunately, it wasn't to be last night [on Tuesday], but on the balance of play it was a just result. Benfica were desperate for the win last night and they got it.

"However, even with a weakened squad, I would still expect Barcelona to win [against Benfica]."