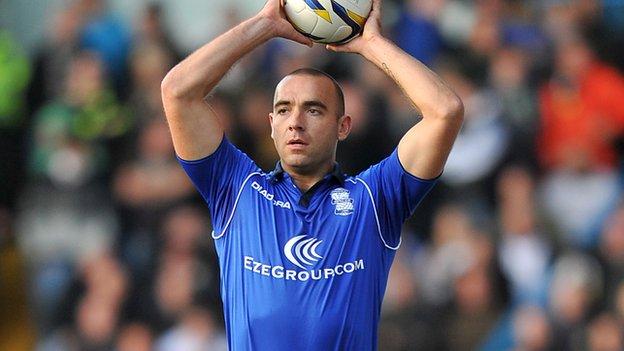 Birmingham City left-back David Murphy faces a worst-case scenario of up to five months out after being told he needs exploratory knee surgery.

The 28-year-old defender is due to have the operation on Thursday evening after limping out of Saturday's 3-2 home defeat by Steve Bruce's Hull City.

"It could be anything from six weeks to five months," admitted Clark.

"He's damaged his cartilage. But we won't know the situation until he has the operation.

"Obviously we are hoping that it is not very serious because we all know he's a very important player to us."

As for Robinson, Clark explained: "We were always looking to extend the contract for a longer term.

"And obviously with Murph now having surgery, he's going to remain a vital player for us.

"We've all seen how well Robbo has done, and in three different positions. Since coming in he's played an important part for us and been very consistent."

Blues are currently 19th in the Championship table, seven points clear of the relegation places, but although they have won only one of their last six home games, they are on a run of three away games without defeat ahead of Saturday's televised trip to Derby.