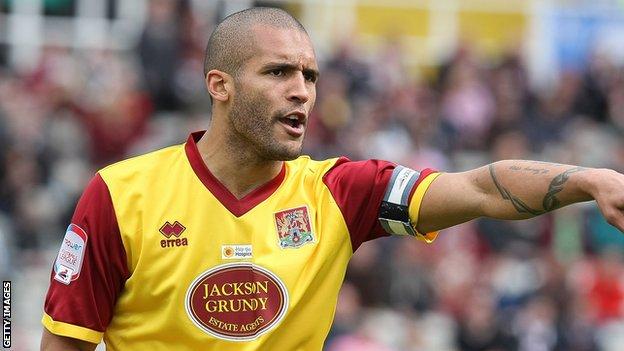 Northampton defender Clarke Carlisle says it was "easy" to fit back into the team in their 3-0 win over Morecambe.

The 33-year-old re-joined the club initially on loan from York City and helped the Cobblers to their first clean sheet since late October.

Carlisle told BBC Radio Northampton: "It was fantastic to be back and it was good to see the boys in such high confidence.

"There's a different level of performance and expectation."

He added: "It's very easy to step into a team when they're working so efficiently together."

Northampton have climbed to within a point of the League Two play-offs and three points of automatic promotion. Since back-to-back defeats by Barnet and Bradford, Aidy Boothroyd's side have won four league games and drawn one.

Including their FA Cup first round replay at Bradford, they have scored 13 goals in their last four games.

"We maintained a really good shape [against Morecambe]," said Carlisle. "When you defend well and keep a clean sheet, the likes of Adebayo Akinfenwa, Ishmel Demontagnac, Jake Robinson and Chris Hackett are going to create chances at the other end."

And Carlisle expects Northampton - who have the best form in the league over the last five games - to keep pressing up the division.

"I've come here because I expect Northampton to be fighting at the top of the table," he said. "I believe Aidy will be successful. I've not come here to be an also-ran."