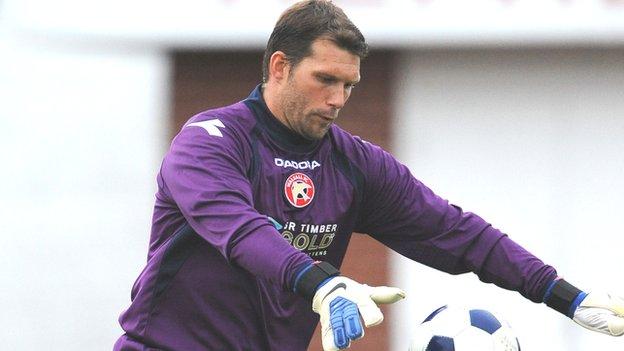 Veteran Walsall keeper Jimmy Walker still has a future at Bescot, if he can restore himself to full match fitness.

The 39-year-old is yet to make an appearance since signing a new one-year player/coaching deal in the summer.

But Walsall manager Dean Smith has dismissed growing speculation on the Banks's Stadium terraces that Walker may part company with the Saddlers.

"Jimmy's still part of the squad," said Smith. "He's not in match condition at present. We've had a chat about that."

But, despite having been kept out this season, first by David Grof, then two loan men, Nottingham Forest's Karl Darlow and now Wolves youngster Aaron McCarey, Smith insists that there could still be a place for Walker - if he can improve on his fitness.

"Wacker knows that," Smith told BBC WM. "And he's going to work hard to get himself back to match condition."

Although his team have not won now in 13 matches since 29 September, Smith insists that the mood in the camp is a lot brighter after successive away draws in the space of four days at promotion-chasing pair Crawley and Tranmere.

"These two away games have restored a lot of confidence in the team," added Smith.

"To go to Crawley and Tranmere and be the better team in both games should help us ahead of the Hartlepool game on Saturday."

Smith is also hopeful that on-loan Stoke City midfielder Florent Cuvelier will be fit after missing six matches with a hamstring injury.

"We thought he was going to be fit for Tranmere," added Smith.

"He wants to get out there and play. But it's one of those things that you can't rush, or else you run the risk of him missing more games."