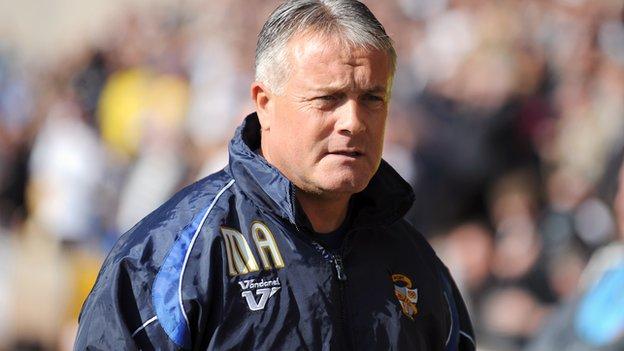 Promotion-chasing Port Vale boss Micky Adams cannot wait to get back to league action after the pain and frustration of two cup exits in four days.

After their 2-1 FA Cup defeat at Adams' old club Sheffield United, beaten by two goals in injury time, Vale bowed out of the Johnstone's Paint Trophy on Tuesday night at home to Bradford City.

"But I think you'll see a better performance from us on Saturday."

On the back of successive league wins, Vale are now just two points behind long-time League Two leaders Gillingham.

And they could top the table if Adams' men win at home to mid-table Chesterfield on Saturday and leaders Gillingham fail to win at fourth-placed Rotherham.

We don't mention the 'P' word. But, while that's easy for me to say after we've just been hammered in a cup competition, that's our priority

Added to that, Vale will be boosted by the return from suspension of defender Richard Duffy, midfielder Ryan Burge and 21-goal top scorer Tom Pope, all of whom were banned in midweek after picking up their fifth bookings of the season at Bramall Lane.

"We don't mention the 'P' word," said Adams. "But, while that's easy for me to say after we've just been hammered in a cup competition, that's our priority.

"We're enjoying a good season and that's what we've got to concentrate on now."

Vale did have one big penalty shout in Tuesday night's 2-0 defeat by Bradford which did not go their way before two goals in 10 minutes early in the second half from Ritchie Jones and Craig Forsyth turned the contest.

But Adams refused to use that as an excuse on what he viewed as a real 'off night'.

"If we're looking for crumbs of comfort, we can look at that," he said. "Games change on major decisions. It looks like he's been clipped. Not only was it a penalty, it's a sending off.

"But I don't want to take anything away from Bradford. They were better than us and appeared to want it more than we did.

"It was unusual for us not to score at home. But this football club is not only about Tom Pope."