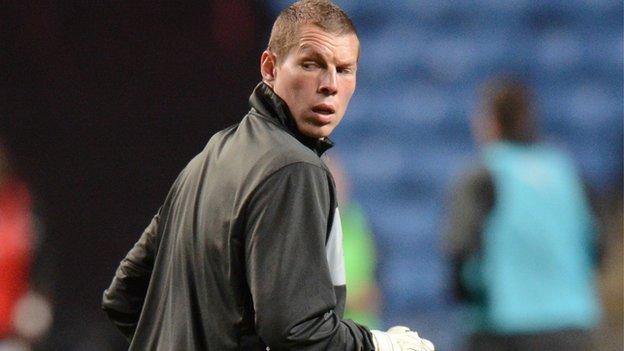 That allowed Chris Dunn his first game in 11 months since the FA Cup third round defeat by Southampton in January.

"It gives me a nice decision to make. Chris Dunn did a decent job on Saturday," Robins told BBC Sport.

"But Joe Murphy has been back in training today.

"He looks in good nick and looks like the few days break has done him the world of good so he'll come into contention."

Murphy has already played a big part in this year's JPT, the former West Bromwich Albion keeper having been an unlikely hero in the 10-9 shootout victory over Burton in September, letting in nine on the trot only to then get up and fire the winning penalty.

After watching 18 penalties in a row go in before his moment of glory, Murphy admitted: "It was a strange night. You rarely see penalties go that far - it was very unusual.

"For me personally, I'd fancy myself in the first five to save at least one, maybe even two. But it was a great standard."

Having won 4-0 at York in the next round, Coventry's first appearance in the JPT has now reached the northern section quarter-finals,

And, after a weekend in which they were paired in the FA Cup with Tottenham Hotspur, 25 years on from the Sky Blues' famous final win in 1987, victory on Tuesday night would bring Coventry a big step closer to a first Wembley return since,

Meanwhile, Sky Blues midfielder Conor Thomas has taken a further step in his recovery from a long-term injury by playing part of Monday's Under-21 game against Nottingham Forest.

The 19-year-old, sidelined since early September, came off the bench for the last 20 minutes in a 1-0 sway defeat.

French defender Kevin Malaga played following his return from loan at Nuneaton, while Reece Brown, on loan from Manchester United, was also included.