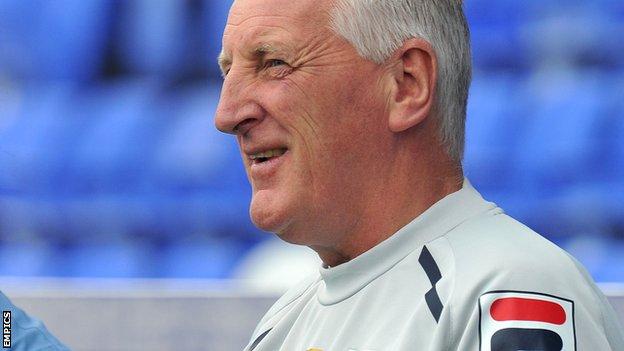 Ronnie Moore has pleaded with Tranmere supporters to be patient with his team while a number of first-team players are absent because of injury.

Moore told BBC Radio Merseyside: "Is that supporters nowadays? You pay your money and you have a shout, but we've come a long way in a short time.

To boo them, I find it astounding, but you pay your money and you're entitled to say what you think

"One or two of the lads were very, very surprised with the reaction."

Tranmere have taken one point from home matches against MK Dons and Walsall and have seen their lead at the top of League One cut to two points.

But their poor recent run has coincided with the loss of several key players to injury, including wingers Joe Thompson and Abdulai Bell-Baggie and striker Jean-Louis Akpa Akpro.

The Rovers boss continued: "I can't ask any more from the lads. We just about had seven subs [against Walsall].

"Liam Palmer's played when they were struggling a bit, Max Power's girlfriend has just had a baby, and yet they get booed.

"I can't do anything but praise those lads. They were on their last legs. To boo them, I find it astounding, but you pay your money and you're entitled to say what you think.

"They [the supporters] have been fantastic all season and they get frustrated.

"If I'd have paid to watch, I probably would have given it a little boo now and then, and then gone home and thought 'I didn't really need to boo them'."