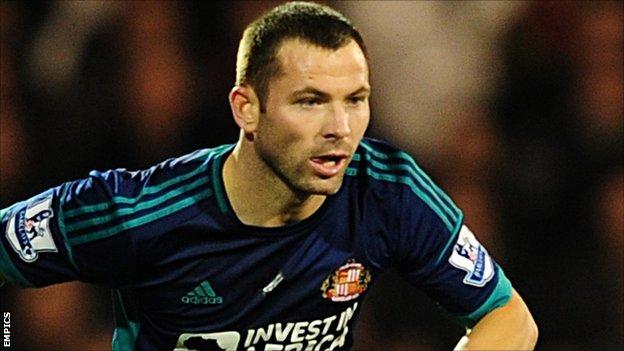 Phil Bardsley is keen to play his part in Sunderland's Premier League revival after ended a six-match winless run.

Bardsley made his first appearance of the season after an ankle operation and has started three of the last four Black Cats games.

"If the manager selects me I just want to come back in and do the best I can," Bardsley told BBC Newcastle.

"The more games I get under my belt now the better I'll become."

Sunderland manager Martin O'Neill turned to Craig Gardner in the 27-year-old's absence, although the Scotland international's return to fitness has restored the former Aston Villa midfielder to his natural role.

"I'm always confident in my own ability and it was only a matter of time before I got back joining the lads at training," Bardsley added.

"No disrespect to Craig [Gardner] as he's done a great job, but if you ask him he really wants to play in midfield."

The operation to remove fragments of bone from his ankle meant Bardsley missed a significant chunk of pre-season, as well as the first two months of his side's campaign.

"When you've not had a pre-season and not played many games, it was difficult for me," Bardsley said.

"I never fear a challenge though and this is a challenge now for me to get back to the form I'd started showing over the past few years and I'm pretty sure I can do that.

"You've got to suck it in a little bit. You've got to win these football matches, that's more important than whether I go off with another pulled hamstring or whatever it may be.

"If it's to save a goal then so be it. I'm just looking to get fully fit and hopefully with the upcoming games I can really get to the top of my level."