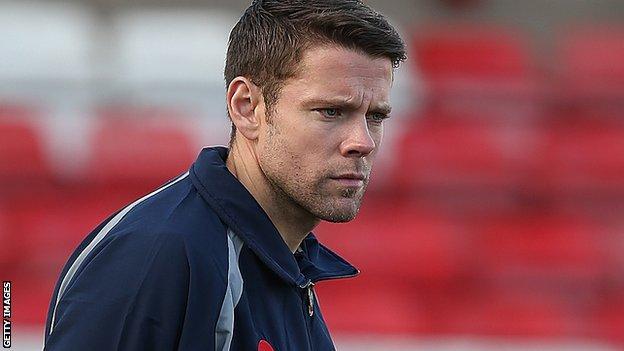 James Beattie has proved he still has the quality to cause problems for opposition defences, according to Accrington manager Leam Richardson.

Beattie scored his first goal for three years in the

"Stats are sometimes false and you saw the quality he's got," Richardson told BBC Radio Lancashire.

"He could have easily had three or four goals. You can see the awareness, the cleverness and the pedigree that he's got and it breeds through the team."

Former England striker Beattie, 34, on 9 November and made his debut at Barnet on Friday, playing 11 minutes as a substitute at Underhill.

He marked his first start for the Lancashire club with the opening goal from the penalty spot at Highbury - Beattie's first goal since netting in the Premier League for Stoke City against West Ham in October 2009.

Accrington have won three of their six matches since Paul Cook left for Chesterfield and Richardson took control of first-team affairs, but Tuesday's victory was by far their most impressive display and result since the 33-year-old became Stanley manager.

"To win 3-1 at a place like Fleetwood shows that the lads have conducted themselves fantastically," added Richardson. "Not only did we win, but we played some very good football.

"I'm pleased with all aspects of our game because the home team will put you under pressure, and when they did, we coped with it very well.

"We took our chances at the right times and we thoroughly deserved to win."

Accrington manager Leam Richardson will be the special studio guest on BBC Radio Lancashire sport from 18:00 GMT on Thursday, 22 November.