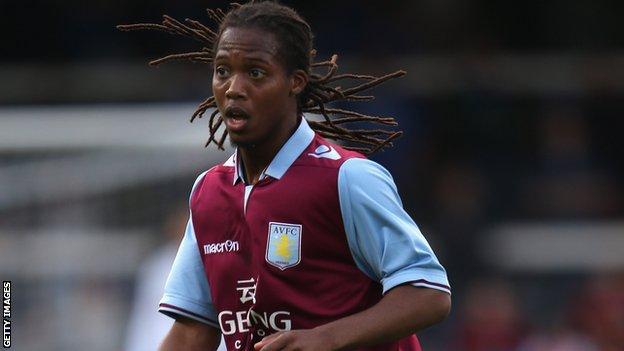 The 20-year-old midfielder still had a week remaining on his month-long loan but manager Gary Johnson opted to send him back to Villa Park.

He made five appearances for the League One club, with his final game coming in the 4-1 defeat by Swindon - in which he was substituted after 36 minutes.

Canadian full-back Peters, 25, is currently a free agent following his release from Portman Road over the summer and previously had a loan spell at Yeovil in 2008.

"We've had him training with us but he's got to renew his work permit," said Johnson, speaking after Tuesday night's win over Crawley.

"He's not quite fit enough yet but he's still quick. His backside is a little bit bigger, and his belly, but we can get that sorted."

Johnson went on to confirm the club were looking at more international options, having already fulfilled their loan quota.

"We've got five loans at the moment so we are scouring the world, because you can get people in if they haven't been under contract in the window.

"We've had a lad from Holland come in and he could be decent. We can strengthen with people like that."