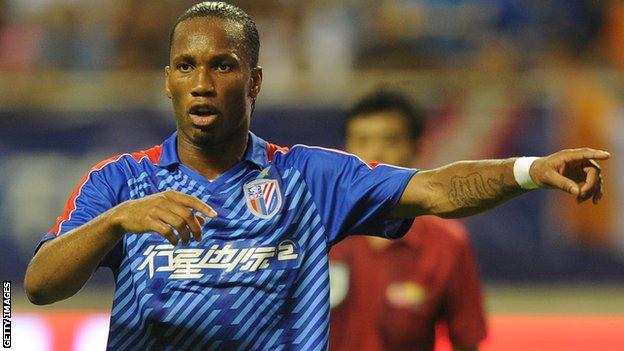 Chelsea's move for Didier Drogba is off after Fifa blocked him from leaving Chinese club Shanghai Shenhua on loan before the January transfer window.

The Ivory Coast international, 34, wants to stay fit to prepare for the 2013 Africa Cup of Nations as the Chinese season has finished.

He asked for permission to move, but has been informed that he is not exempt from international transfer rules.

Chelsea had been in talks over a deal for their former striker.

The Blues are short of attacking options with Fernando Torres out of form and Daniel Sturridge injured.

Fifa said in a statement: "We can confirm that the player Didier Drogba submitted a request for authorisation to be registered outside an open registration period for a club on a loan basis.

"Fifa has informed him about the relevant regulations, that players may only be registered during one of the two annual registration periods fixed by the relevant association."

Drogba, who had also been linked with Liverpool, spent eight years at Chelsea after arriving from Marseille in 2004.

His last act in a Chelsea shirt was scoring the winning penalty in the Champions League final defeat of Bayern Munich in May.

The striker teamed up with former Chelsea colleague Nicolas Anelka in China in June after agreeing a two-and-a-half-year contract with Shenhua.

He has scored eight goals in 11 games for the Chinese side.

The 2013 Africa Cup of Nations takes place in South Africa between 19 January and 10 February.