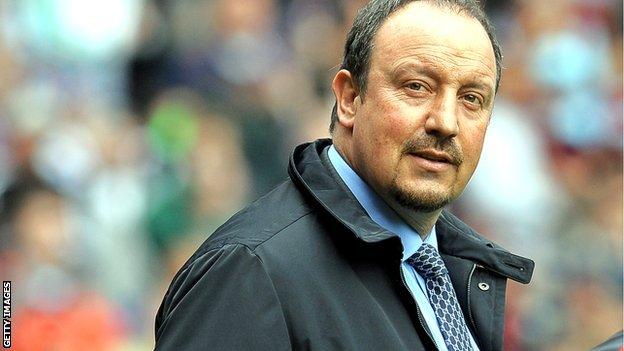 Rafael Benitez will improve Chelsea and target silverware now he has become the new manager at Stamford Bridge, according to former Liverpool and Germany midfielder Dietmar Hamann.

Hamann, a Champions League winner under Benitez at Anfield, said his former boss is attracted by the chance to once again manage in England.

"He is a very talented and outstanding manager," Hamann told BBC Sport.

"He's a very good tactician and his track record is well-documented."

Roberto Di Matteo was sacked as Chelsea manager on Wednesday following a 3-0 defeat at Juventus in the Champions League which virtually ended the defending champions' hopes of qualification to the knockout stages.

Benitez, whose Liverpool side won the competition in 2005 by beating AC Milan on penalties, had been out of work since losing his job as Inter Milan coach in December 2010, but has been installed at Stamford Bridge until the end of the season.

And Hamann thinks now is the right time for the Spaniard to return to management.

"There are not too many clubs in England where you have got the opportunity to win the league."

The Blues are winless in the Premier League for more than a month, and currently lie third in the table - four points behind leaders Manchester City.

They have also failed to keep a clean sheet in their last 10 fixtures, and Hamann believes that 52-year-old Benitez will strengthen the side tactically and in the January transfer window.

"He's a very meticulous worker and he puts a lot of emphasis on tactical exercises and you can see it - his handwriting is all over his teams," said Hamann.

"[But] I don't think there is a whole lot to change. Hopefully if he goes there he'll get them a few results and things will change for Chelsea."