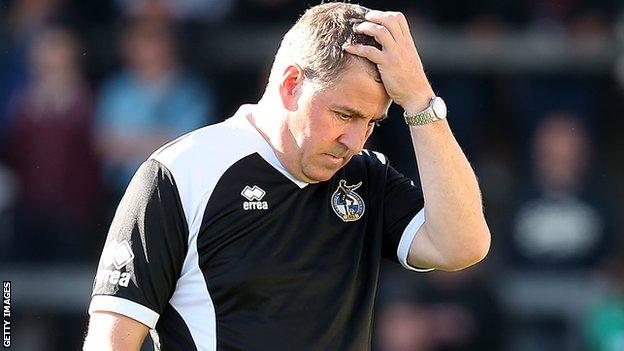 Bristol Rovers chairman Nick Higgs says he sympathises with manager Mark McGhee because his first-team squad has been ravaged by injury.

McGhee's side currently sit 21st in League Two, one point off the relegation zone, and have won just four games all season.

Following their 4-0 drubbing by Port Vale, Higgs told BBC Radio Bristol: "I feel for the manager.

"He's not been able to field the same side two weeks in a row."

McGhee lost last season's top-scorer, Matt Harrold, to a knee injury early on in the season while captain Matt Gill and defenders Cian Bolger and Danny Woodards have all spent a substantial amount of time on the sidelines.

The Scotsman could also now be without Tom Parkes, who picked up an ankle injury against Vale, while goalkeeper Neil Etherington has been recalled from his loan by Fulham.

Higgs added: "Mark is working his socks off to try and bring players in and we've got a list of players we are looking at now."

McGhee took over from Paul Buckle at the Memorial Stadium in January, with Rovers five points off the dropzone, and he led them to finish the season in 13th.

But pressure is now building on the former Brighton boss to turn around the club's form.

"I'm very concerned," admitted Higgs. "So far, the season hasn't gone to plan but there's a long way to go.

"We're all under pressure. This is not acceptable and this is not where we want to be.

"But there's still a lot to play for. If we win our game in hand we are only four points off mid-table and 10 points off the last play-off position."

He concluded: "I will continue to back the manager in his quest to take the club forward."